by b°tong I EMERGE I If, Bwana I Gerald Fiebig 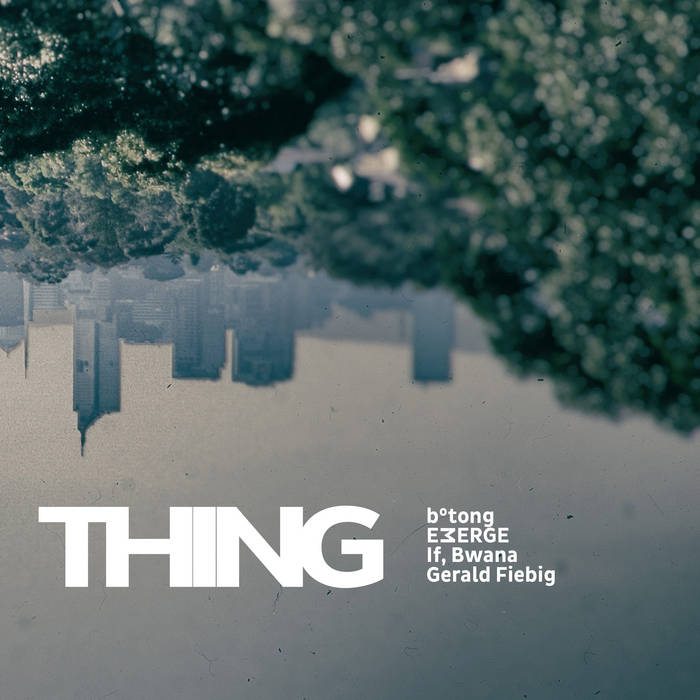 previously released on vinyl in 2013

previously released on vinyl in 2013

In 2022, attenuation circuit starts a new series of four-way split albums called THING. The aim is to provide a medium for exchange and presentation of a great variety of artists. As each artist spreads the copies to their network, listeners also get to know the other artists featured on the same disc. The title references the fact that the CDs are physical objects – things! – but also refers to the 'thing' or 'ding' in old Norse and other Germanic languages, which designates the place of a popular assembly or the assembly itself and thus alludes to the 'meeting-place' character of the albums on (or around) which the four artists and their audiences meet, if only virtually.

With the first instalment of the THING series, attenuation circuit also celebrates the 10th anniversary of its very first vinyl release. In 2012, b°tong and EMERGE released their self-titled split LP on the label. In contrast to other split LPs, their pieces were composed specifically for this LP, with both artists sharing the same pool of sound materials to create their respective pieces. The 100 copies shared a common design created by visual artist Tine Klink, but as all sleeves were hand-painted, each copy had a recognisable, yet still unique cover. This concept earned the label a mention in recognised art director Stuart Tolley's book “Collector's Edition: Innovative Packaging and Graphics” (London: Thames & Hudson 2014).

In 2013, this album was followed up with another split LP by If,Bwana and Gerald Fiebig which followed the same musical and visual approach. Together, these two split albums formed attenuation circuit's original Vinyl Series, which was soon replaced by individually conceived vinyl albums. To celebrate the anniversary of attenuation circuit's first venture into vinyl territory, this THING collects all four sides of the two original LPs. To retain the “LP side” feel, the two pieces by If,Bwana have been transferred to the CD as only one track.

The other new release is a re-issue of two LPs, both released in an edition of 100 copies. They had hand-made covers and had a recognizable yet still unique cover. I reviewed the one with B*Tong and EMERGE in Vital Weekly 858, which I re-run here:
"The release by Swiss B*tong and Emerge was released on a highly limited LP and no doubt sold out, but it's also available as an unlimited CDR release - which is what I have here. Emerge is 'man behind the label', and active force B*tong has had a couple of releases on this label already. They both work extensively with computers to process whatever sounds they have at their disposal. B*tong uses his sound sources here, although we are not told which ones they are, and Emerge uses the same sounds for his composition. There are more similarities: both operate from a rather dark end of the sound spectrum. Atmosphere, space, and ambience play an important role in this music. And perhaps minor differences. Here we have the sons of Legion (see elsewhere) playing their version of dark ambient music. Using concrete sounds, feeding it through vast amounts of computer treatments, they create a sonically dark, layered, atmospheric piece of music - each one of them. B*tong's piece is a bit more bass-like, and Emerge's take on that is a bit higher-pitched at times, with nastier frequencies, and might be accounted for as something a bit more industrial than by B*tong, who stays on the more ambient side of these matters. But the margins on such divisions are quite small. You could as easily think that this release was by the same band for all I know. I didn't hear much new for either band, but for the record, I'd like to note that both works are powerful, in the case of Emerge probably the best I heard from him."
The other record back then is by Gerald Fiebig and If, Bwana, and reviewed in Vital Weekly 916: "Although best known for their CDR and online releases, Attenuation started to release vinyl too, and this is their second release. Like the previous release, this is a split release with If, Bwana and Gerald Fiebig. Both of them have had several releases on this label. They use each other sound sources, which leads to different results. On the If, Bwana side, we find the sound of recorders as taped by Al Margolis, mister Bwana himself, and organ recordings by Fiebig. Apparently, according to the info, we have two pieces here, one of each instrument. In the 'usual' methods applied by If, Bwana, all of these sounds are layered together, not unlike Phill Niblock would (with whom If, Bwana tours now and then). Chopped into small loops on a constant repeat mission but never starting simultaneously, it forms a rather dense mass of sound. Many layers should be understood, many, maybe even 1,000 or so. The recorder piece is slightly dissonant, it seems and has an edginess which I don't think I heard before in If, Bwana's music. It just as easily moves over into the organ piece, which applies a similar technique, but which is slightly more 'melodic' and less dissonant and maybe more what you would expect of such drone-like sounds. It's something I rather enjoy very much. This is perhaps the lo-fi version of Niblock, but it works pretty well.
Now Fiebig, on the other side, may use the same recorder and organ sounds, he also adds the acoustic guitar of Jesus Jackson (processed by Emerge), the electric guitar of Mathias Huber and an electric recorder which he played himself. Here more is indeed less. You could expect a lot more sounds and even more density than If, Bwana does, but it's not something like that at all. Fiebig distributes the sounds relatively sparsely throughout his side. It moves very slowly, back and forth between the different sources, and just sometimes you recognize the acoustic guitar or the recorder. Sometimes playing together, but it seems that a lot of the time they are on their own, like stars at night - moving solely in the firmament. That seems to be the case here, with very occasional interaction. If that happens, in what appears to be the middle of the record, minor melodies are formed around carefully placed crackles, slowly moving a gentle drone in to fade out in the end - excellent, peaceful music. Perhaps the most gentle music I encountered on this label. Pressed on white vinyl, which is perhaps not the most optimum for this delicate music."
I ran a spellchecker on these reviews to prove I am not an entirely lazy sod, so consider this version the improved remix of two already known great LPs.