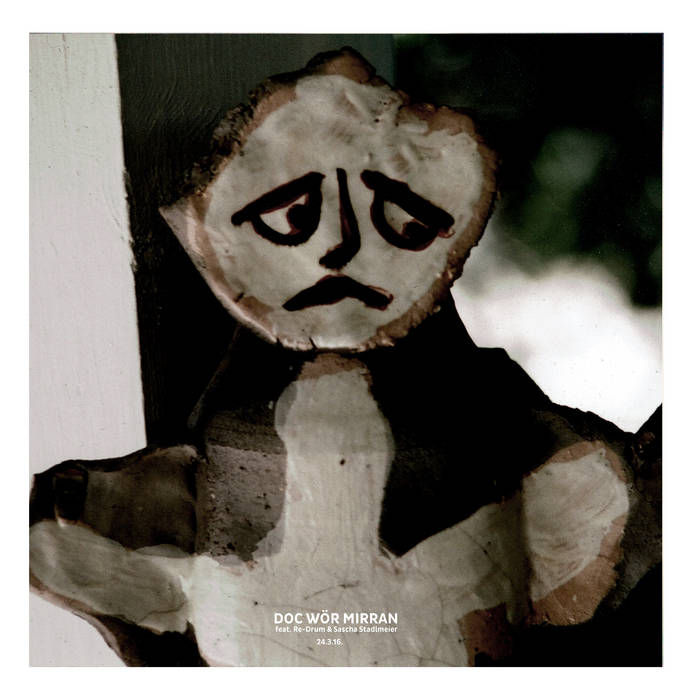 This is DWM release # 148
Dedicated to Heather Heyer
As always, in loving memory of Frank Abendroth and Tom Murphy

Throughout their 148 releases (including this one) to date, Doc Wör Mirran have been one of the most important connectors between the post-punk indie rock tape/DIY scene and its more industrial-inspired sibling, the drone/noise underground. On this album, Doc Wör Mirran (in what is basically a rock-band set-up with guitars, bass, percussion, and synths), prove this point by featuring two guests from the European drone scene: Russian drone artist Re-Drum and Sascha Stadlmeier. Known in the global dark ambient/drone scene under his moniker EMERGE, Stadlmeier increasingly operates under his given name when improvising (as he does here) with prepared bass, guitar, and objects.

Recorded on 24 March, 2016, at Doc Wör Mirran’s Two Car Garage Studios in Fürth, Germany, the two sides of the LP contain two parts from the improvisations recorded during that day – hence the understated album title. It pays to decipher the A and B side indications in the clear vinyl, as the flip between side A and B is not only a technical necessity of the format. It is also a shifting of musical scenes, and it makes sense to listen to it in the intended order. Side A establishes a rather static sonic swamp landscape, punctuated by occasional cries of passing theremin birds and the gargling of synthesised frogs, while short pulses of basslines emerge and disappear from the surface of the mix, reminding listeners that this is uncharted territory. Flip to side B, and the subdued tension built up throughout side A erupts. Metallic clangs, noisy barks, the flapping of delayed percussion, and the scratching of miked objects gang together to invade the untouched swamp, wreaking havoc in previously untouched nature until only the mournful faces of tree stumps remain (like the painted tree stump sculpture from the back garden of Doc Wör Mirran founder Joseph B. Raimond, shown on the cover).
This is improvised music with a surprisingly narrative feel. Electronic soundcraft and instrumental musicianship combine very effectively here, and the players show a great sense of economy in the gradual up building and changing atmospheric details.

This is the 148th release by Doc Wör Mirran, and for a moment or two I was thinking about that. I know for a fact that I didn’t hear them all, but then, how many did I hear? I am not sure, but surely a lot. A quick search in 1107 issues of Vital Weekly showed that the name Doc Wör Mirran popped up thirty times, but also before that I heard many of the records and cassettes. There are a few things I like about this band, and one is that membership is quite open, but always-involving Joseph B. Raimond and that the music can be in many different styles. Punk, rock, experimental, noise, ambient. Or plain improvised as on this record, which for whatever reason lists two guests separately, Re-Drum and Sascha Stadlmeier, a.k.a. EMERGE, who headed out to Nurnberg where the Two Car Garage Studios are located, on March 24, 2016, armed with electronics, guitar, bass, effects where Stefan Schweiger (theremin, percussion), Michael Wurzer (synths) and Raimond (guitar and bass) were waiting to record a whole bunch of improvised music out which Raimond mixed the forty minutes of music on this release. I was thinking (some more) if this kind of group improvisation, that holds the middle ground between out there (kraut-) rock, object abuse and sampling and drums is something I heard Doc Wör Mirran doing before and I can’t say I have. On the first side this quite open, with everybody (so it seems) in a free role, playing sounds sparking off into an infinity space, whereas on side B there everything stays together and dense field are created in which individual sounds remain just that: individual sounds jumping up and down. Somewhere half way through the second the bass sound becomes very heavy and reminded me of early Throbbing Gristle, while the percussion now becomes something of it’s own, kling-klanging about. Part industrial music for sure, but as said also inspired by the world of krautrock, but in their very special way, I guess. That was a rather productive day at the Two Car Garage Studios (I always wonder what that looks like, seeing it mentioned so often). This is a very fine Doc Wör Mirran release, again one that is a bit different in the vast universe of this German band.

An impressive list of 148 by Doc Woer Mirran is also a great testimony to the transition between post punk indie DIY genre towards more improvised blend of post-industrial psychodelic drone ambient that the collective represents now.
This record is a result of one day improv session which includes Emerge's Sascha Stadlmeier and Russian drone artist Re-drum. Put nicely into two parts of the vinyl album with primitivist design makes you feel like dealing with self-defining artists who break boundaries of genres in an unassuming, natural way.
Prepared instruments, electronic bleeps, delayed percussive flaps, guitars and bass in a new tuning mode - these are just tools but the outcome is more than just an improvised jam.
There is definitely a nice progression here - using small details to make you feel like you are entering something larger - great soundtrack to anything you can imagine - steadily building up the tension and setting up the climax of harmonies and themes into quite frankly, an unforgettable piece.

The five convened last year on March 24th at the group's Two Car Garage Studios in Fürth, Germany for improvisations, two parts of which have been preserved on this attractive slab of transparent vinyl. As it turns out, the format suits the material extremely well, separating as it does two parts that are considerably different in tone and dynamics. With a bass pulse intermittently arising to establish some semblance of order, the twenty-minute opening side pulls the listener into its caustic undertow with wild, pitch-shifting synth flourishes wailing alongside death-rattling percussion, whooshes, and bells. Suddenly emerging from this thick industrial swamp are e-bow guitar textures that immediately point the material in a somewhat prog-like direction in manifesting a strong Crimson-oid character. While violent flourishes do ripple across the sound mass, the five hold the presentation to a generally subdued level as they generate rich, percussion-heavy atmospheres. In this first half, the landscape conjured by the participants is raw and desolate, the terrain littered with smoldering ruins and the carcasses of decaying bodies.

The control exercised on the first side gives way to a considerably more eruptive presentation on the twenty-two-minute flip with the material on side A brought to an intense broil. Again a bass pulse intones, but now the noise mass threatens to render it inaudible as it escalates feverishly. Metallic clangour, sirens, and fluttering percussion effects fill the air, which grows ever more noxious as the minutes advance, and at the nine-minute mark a seething noise wave large enough in scale to consume everything in its path emerges. Improvised it might be, but the contributors' kindred sensibilities ensure the material never turns directionless. This is experimentally driven electroacoustic material that needs to be played at high volume for maximum impact, but you might be wise to warn the neighbours and shut the windows before unleashing it.