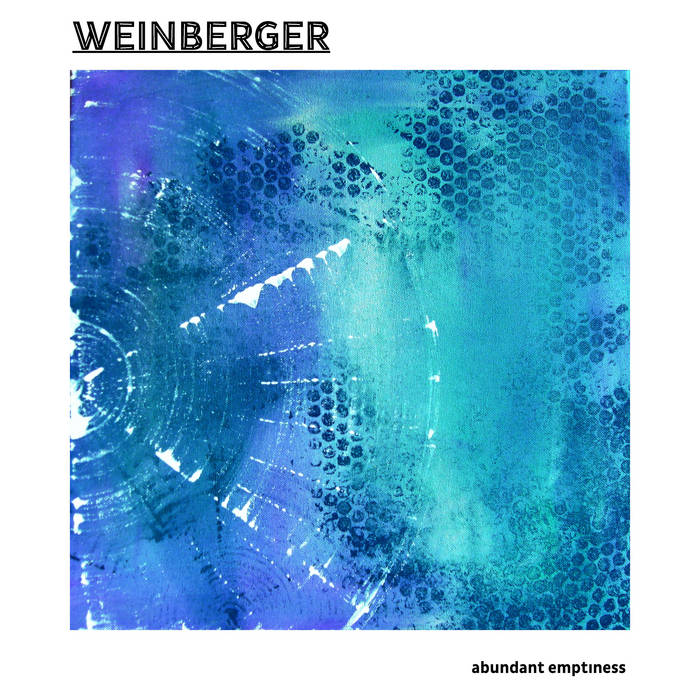 Johannes Leo Weinberger is an Austrian poet who apparently not only has a gift for intense images, but also loves to use his speaking voice as a rather abstract musical element in a beautifully leftfield cocktail of synths, cheap beats and guitars, which is decidedly pop, yet of a deeply psychedelic persuasion.

While this mini-album of 7 tracks will please many listeners who are into the minimalistic dada-esque electronics of Der Plan or Felix Kubin, what really makes this release special is the way in which Weinberger lets his voice wander between ‘abundant’ imagery and the ‘emptiness’ of completely incomprehensible passages – which makes the whole thing all the more intriguing. As if there were a secret hidden between the words and the sounds that the listener cannot quite grasp …

The release might start a bit like a border control. Noses in line and a bit of a check before really going into the fun part, but please do stay on and go through the hassle as happily the bright voice and eclectic beauty of bell like sparkles of friendliness will unarm you like a well willing friend you had always hoped for to meet!

Life under fingernails is another great glorified obsession gone viral into the amazing audio art world of the pleasantly original artist named Weinberger. The life under his finger nails is so much fun to listen too that it almost makes me want to visit that nerdy father from ‘honey I shrunk the kids’ to join the festive partying bacteria that are having a party under the fingernail-roof. It’s difficult to explain for you how this all sound but you can expect a pretty active and positive zone of sing and dance and other outer-micro entertainment that feels positively energetic and yet bizarre in a fun way. I love it and I’m not even the size of a bacteria!

Talking about things we should love; penetration. The penetration by this Weinberger is well lubed with friendly electric spit coming from the mysterious sound machines that this artist is rocking. When the infectious music gets joined by a great swinging home baked beat and vibrating pulses of lose electric semen it really becomes the most pleasurable fuck the ears have been engaged in.

Even a case of a smouldering spine becomes something worth to spend time in as it is in the audio world of Weinberger not a bad thing to hear. You can hear the nerves in the spine doing a fanatic solo, shooting pulses to the back as the artist beats it steady with a heavy base-kick like a pleasant massage.

The concept of ‘Universal Trouble’ is a beautiful mix of strange knowledge and the pleasurable intelligent experimental funky synthetic audio that contains a complete weird universe full of answers on its own. Undoubtedly one of those undefinable tracks that should be heard through your own ears, to get an idea of what a pleasure these audio creations are.

‘Whistling on the porous heart’ is the track that is the most closest to normality in yet a faraway world of lunacy. It features the tender voice of Weinberger who has been visiting in every tune but now seemed to have a more prominent role. The flute that is nicely fabricated through a gateway drug is functioning as the female counter part of his voice doing a uptime form of relief. A dramatically happy ending comes with a guitar, spicy sounds and Weinberger making sure we know what it is all about.

The last track (your body looks broken) is like an energetic pleasant bubbling happiness of energy that gives us free running shoes, space ships for luggage transportation and warm words colliding with a greatness that can only be described as originality of the highest order. And when the synthesizer heaven opens up with an active breakbeat a trilling organ comes down on a sportive cloud of pure happiness Weinberger howls to us in a blessing way and from the place that my ears are receiving this; it feels oh so good!

This album by Weinberger is a very refreshing positive heads on experience in which creativity had shown up and decorated each track in a solid mass of pleasant strangeness that is of a high inspirational kind. Weinberger’s vocals, great skills in programming and refreshing electric unexpected delivery really makes this album for sure one to place on the bucket list of things you should hear before you die!
<KN>
yeahiknowitsucks.wordpress.com/2014/09/23/weinberger-abundant-emptiness/