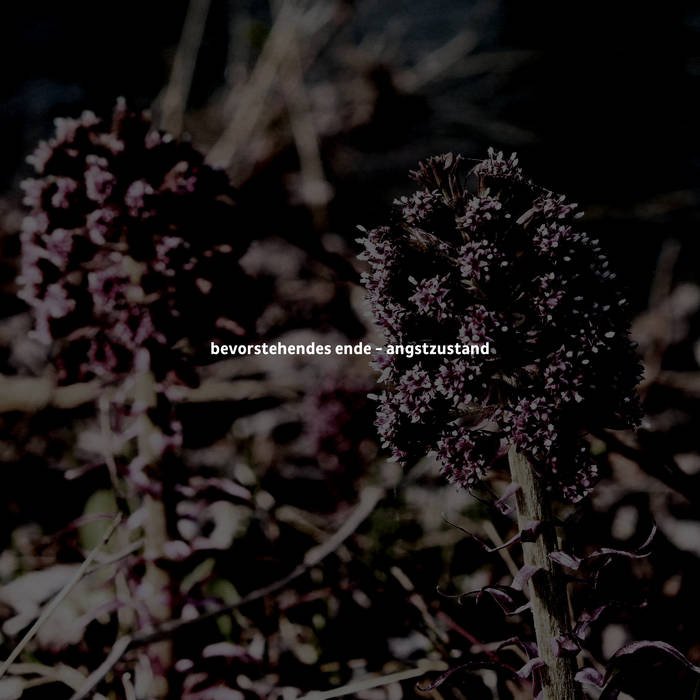 We travel again to Germany for a uniquely rhythmic noise project. With artists like Flutwacht and now bevorstehendes ende, we once again draw light to the fact that Germany’s noise scene needs to be taken notice of.

Track 1, “vandal se,” is an ominous piece that maintains a dark ambient background and various synth hits and the highly wave-like distorted sound of a razor running up and down a electric guitar string. Track 2, “g-20 summit,” starts with a reverberated drill-like sound immediately followed by an extremely abrasive harsh wall with varying frequencies and guided by a rhythmic beat. Right away, you recognize that the artist is definitely offering something unique for the scene though it is difficult to pin-point the specifics. The “wall” in track 2 breaks up a bit with different noises as though we are up close to a several-man construction project (i.e. the drill, the jackhammer, the power cleaner, heavy machinery etc.). This is a very complex track but contains all the right reasons why we listen to noise in the first place. Track 2, when listened to through the ear phones is nearly too much for the brain to handle.

Track 3, “gehim” starts with a Godflesh-like beat, highly distorted industrial sounding stomps and one of my favorite inclusions in noise – the use of spoken word samples. It’s almost as if we are living closely to a series of bombs being dropped and while attempting to tune in to the war announcements on an old radio. Tracks 3 and 4(a remix of track 3) quite honestly might be some of the heaviest tracks I’ve heard next to SS Electronics’ “Elsa Fraulein” release. Track 5, “schladel” highlights the industrial stamping-press sound and minimizes the noise. The complex layering develops and the noise grows into a very apocalyptic-sounding track. The final track, “him op,” uses a very similar beat to 3 and 4 but again uses complex layering with industrial hits, and heavily distorted noise. There also exists a constant mid-tone noise (sounds like a hung-up phone) that creates more of a hypnotic feel putting the industrial sounds and noise into the backdrop.

Once again my faith in Germany as the place to look to for underrated noise artists remains.