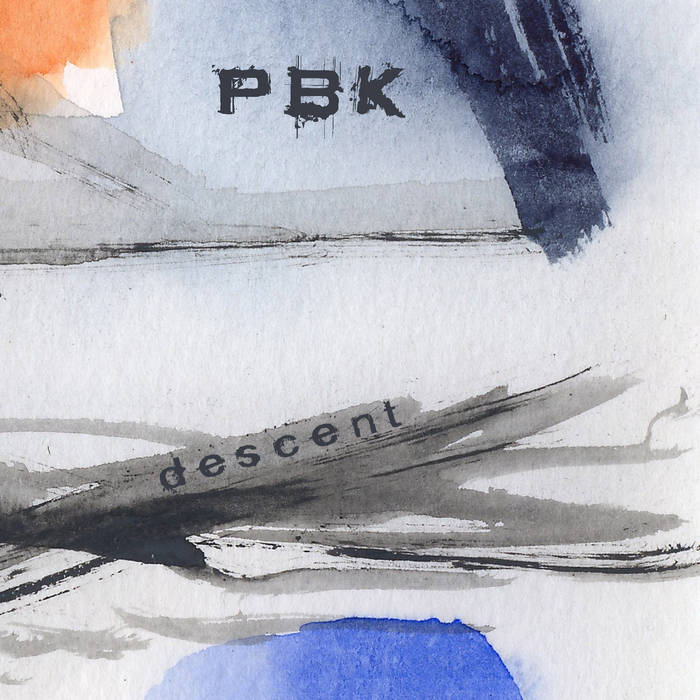 Among the artists from the late-80s experimental tape underground who inspired the music of EMERGE and the founding of Attenuation Circuit, PBK is one of the most important. Therefore, we are extremely proud to present in a digital format for the first time his first solo release “Descent” from 1988, which the artist aptly describes as “dramatic atmospheric space-drone with plenty of analog synthesizer, via Dave Prescott, who once ran the Generations Unlimited label, releasing works by Conrad Schnitzler, Morphogenesis, etc. Prescott owned one of the largest modular synths ever assembled and puts it to striking use on this tape. Combined with PBK's Moogs, loops and drones, and howls of anguish provided by the irrepressible Minóy, all echoing around in the strange space of a Radio Shack mixer's spring reverb.”
“Minoy’s bedroom isolationist approach produced something that seemed otherworldly, spiritual and more like paintings, which was my own background. I took Minoy’s approach as my own model,” PBK says about their late-80s collaborations. This eminently emotional yet perfectly poised masterpiece of “noise ambient”, as PBK came to call his approach to music, is stunning proof that the international tape underground brought forth truly new sounds in electronics that are second to nothing but the most revered academic work by the likes of Stockhausen or Xenakis, and certainly opened up these ways of exploration to larger numbers of people. As fellow composer and Sound of Pigs tape label activist Al Margolis/If, Bwana says about the late Minòy (1951 – 2010): “i heard Minoy’s work before i had ever heard Stockhausen’s Hymnen – so that my take on hearing Hymnen was that it fit in this continuum …not the other way around!!!”

Descent was PBK’s first solo album and is the first in a series of re-issues that the Attenuation Circuits label will be putting out.

PBK is Phillip B Klingler who originates from Flint in Michigan. He started out as a more visual artist but slowly gravitated towards music and started working as PBK working together with Minoy a well known name from the underground tape scene.

Descent features appearances from Minoy and also analog synthesist David Prescott (who ran the Generations Unlimited label) who had a large modular synth that was put to good use on this album.

Descent consists of two tracks the first (the 30 minute long)Desire is based around a fast moving arpeggio type of sequence that the rest of the sounds have to fight with or fit in with. Sometimes they work and at others they don’t. It’s more of a collage than a developing piece of music as the basic sounds are omnipresent and other pieces come and go adding to the piece rather than moving it to somewhere else. You get a whole mixture of things from vocal samples to analogue filters to field recordings. You get the impression that this might have been recorded in one live take as there are elements here that perhaps shouldn’t have made the final mix and a few sounds that really detract from, rather than add to, the overall feel. Generally these don’t outstay their welcome and get replaced with other more complimentary noises and sounds.

The 2nd piece Descent (another 30 minute track) is pretty much in the same vein as Desire though perhaps with a slightly more ambient or industrial feel and with more space to it. It’s a more accomplished piece than the first and it would be useful to know how much time there wass between recording both pieces. Descent has influences from TG and SPK firmly in there but also has its own little unique touches that make it more than just a homage.

For a first solo album Descent has plenty of strong points and it’ll be interesting to see what parts of PBKs extensive and varied back catalogue Attenuation Circuits decide to reissue. DB.

Phillip B Klingler: that's what PBK stands for. No secret but just in case you didn't know this and that might happen, since PBK might not be a household name these days. Unlike the late 80s when he rose to small fame in the underworld of home-brew cassette releases. He never went 'away' or in hibernation, but perhaps was not always as visible in this twenty-five year career. I am not sure if this re-issue of one of his earliest cassette releases is part of a longer campaign to re-issue earlier works, or perhaps part of an anniversary of some kind, but its great to hear it again after so many years. 'Descent' is perhaps his first true solo release, and sees him take inspiration from Minoy and David Prescott, rather than Stockhausen of Xenakis (I am using the press text, thank you). At David Prescott's he taped a whole bunch of synth sounds and spread these out over the four tracks of his machine and then started to mix them, adding more synthesizer sounds, tape loops and such like, and the result is one of the earliest instances of 'ambient' meeting 'industrial'. It has that spacious character of ambient music, like being in a stream of sounds (as in a stream of consciousness) but at the same time has an angular character, a certain aspect of being nasty, that remote, desolate, empty industrial waste land image that makes it 'industrial'. Composing is perhaps not the sort of thing that applies here, but rather a surrealist take on mixing odd tracks of sounds together in two long form pieces of music. Intuitive playing and mixing, a surrealist approach to the art of composing, that is what PBK is best known for and here he does a great job at it. An early work, but what a fine piece. (FdW)

PBK (Phillip B Klingler) is huge, a tape artist phenomenon with household name recognition that inspired many with its authentic sound of audio art and mystery. One of the influenced admirers was the label owner of Attenuation Circuit, a record label certainly not unfamiliar with sounds that are inspiring. You can imagine that now that PBK had somehow flew itself onto this very label, something PBK did with a very descent sounding rerelease named (what a coincidence) ‘descent’, that the label owner must have felt very similar to a young Michael Jackson fan meeting Michael for the very first time in ‘NeverLand’. Exciting!

It simply doesn’t happen every day to meet and work with someone you look up to. Perhaps if you are fairly short it would have been a different story, but the fame and glory of the legendary PBK is pretty much larger than life & that is pretty large. The ‘Descent’ release that clearly dazzled the owner of the Attenuation Circuit label into a fanboy who is standing ready with a autograph book and exciting butterflies in the guts, is not a crazy act. The music is indeed something you (and other people) would lick your lips for. Two sessions of slightly more than half an hour are there to please the ears.

You might have heard it long time ago, as it is in fact a re-release of PBK’s first solo album. But it doesn’t matter if you have been familiar with this famous tape hero from the eighties, or are completely new to it; as one will be happy to rehear and the other would be happy to hear it for the first time. It’s a win – win situation, really.

Music wise it’s of course high up in the highest standards. Two atmospheric pieces that are very original; the vintage synthesizer sounds are the true leader over here but also how they are actually played & the additional adding of other sounds gives this work a fine depth. Personally I felt it like walking through a enormous art gallery, a place in which little groups talk while they stroke their chins and look intellectually pleased with all the artworks on the walls. It is definitely not only artworks on the wall, but more a ‘multimedia’ art exhibition that I feel this music is taking me.

Wandering around while these two synthesizer friendly works build the right climate and atmosphere. It’s great to hear as it takes you away to a place that feels like its one with lots of things to see and hear; and you don’t really need to step around but just relax and hear it with your own ears. Modern museum visiting for people who don’t really want to go, but still want to hear the soundtrack to it all.