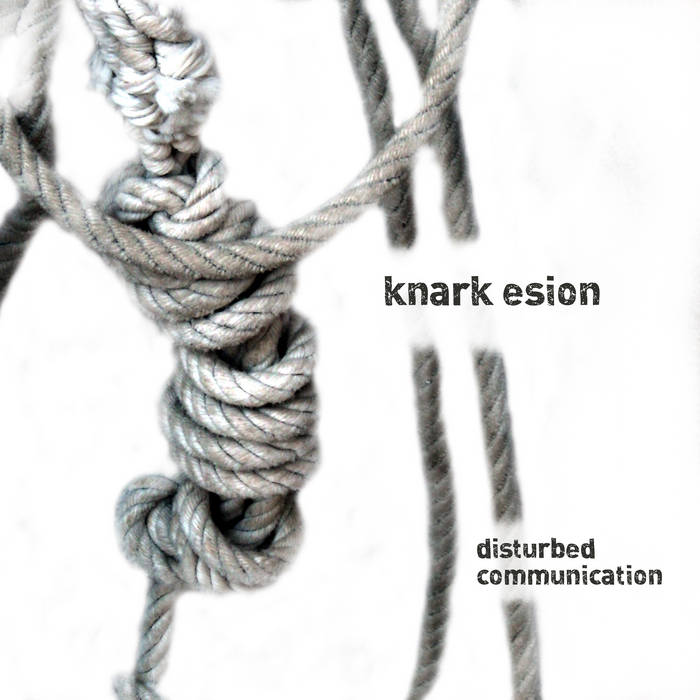 While some passages in this set truly deserve the label ‘harsh noise wall,’ others are almost contemplative and sedate when droning synthesizer chords suddenly emerge out of the even noisier backdrop. The fact that this is a live improvisation where the players interact with each other, leaving some spaces between the collective assaults, helps to make this short piece perhaps more interesting than a 70-minute all-out white noise excess. Sometimes the ‘musical’ fragments, especially the occasional beats, do have a slightly parodistic character, though – the title, as well as the fact that the set was recorded ‘live at some curious event’ that’s otherwise left unspecified and the quote on the sleeve stating that ‘the counterculture is perfectly aware of where to begin the job of demolition’ seem to imply that Knark Esion clearly adhere to the use of noise as a sabotage of cultural codes. And a pretty delightful sabotage it is, at least as far as this release is concerned.

Recorded at an unspecified event in 2012, Disturbed Communication is a single, set-length track from a quartet of noise artists. Elektrojudas, Sustained Development, Kim Jong-un and Exedo have come together as Knark Esion to explore noise as live performance over the album’s 25-odd minutes.

If there was a prevailing feeling behind the piece, it would be of deep space, of wavy, watery sounds battling against a howling solar wind. Evolving, bell-like tones crop up and there’s a gamut of pick slides along guitar strings that tip the lid to ‘Interstellar Overdrive’-era Pink Floyd.

For the most part, the recording is pushed into the red. There’s an almost indispensable wall of fog, of distortion which obscures the origins of the group’s noises, so the listener spends much time mystified. There’s some deeply creepy tones occasionally let down by stock patterns or playing which break the mood.

When it works, it’s great – what sounds like hell’s vibraslap plays in time with a martial beat. Ominous, immense organ heralds the coming of a pissed demon. Sawtooths and bandsaws bid for your attention. A sound like the scraping of rocks (used to such great effect in Einsturzende Neubauten’s ‘WÃ¼ste’) is in plentiful supply. But the overriding tone is of a mangled, almost-harsh wall of noise. Oddly, it’s when these tones drop out that the quartet’s work is best – it subtracts the brow-beating and replaces it with the paradoxical claustrophobia of deep space.

As is sometimes the case with collaboration, some opportunities are missed with this recording. It’s a noise release, so it’s a little much to expect a quieter set, but moments where a little more exploration of the quieter tones unfolding in the music – when certain ideas have been exhausted and the next has yet to kick in – would have paid dividends. There’s a feeling in some circumstances of playing for the sake of playing, when the key to improvisation is playing the most fitting part, rather than the busiest.

Improv obviously shouldn’t be wholly nailed down, but a rough outline is often a good idea, and it’s the lack of this which hamstrings this release – rather than feeling some sort of immense push towards an end – a whirling void still counts! – there’s more often the feeling of what-do-we-do-now? confusion which slackens the pace, often developed pretty thoroughly until such stumbles.

A quote from George Steiner’s In Bluebeard’s Castle (read the complete culture-busting essay here) adorns the back of the release.

The counterculture is perfectly aware of where to begin the job of demolition. The violent illiteracies of the graffiti, the clenched silence of the adolescent, the nonsense-cries from the stage-happening are resolutely strategic. The insurgent and the freak-out have broken off discourse with a cultural system which they despise as a cruel, antiquated fraud. They will not bandy words with it.

Fine sentiments, sure, but also a little nearsighted: it infers the release is sticking it to the man, but the music within isn’t anything too out of the ordinary for those who listen to noise or improv music. I understand the desire to nail one’s colours to the mast. However, if you’re going to pull out Steiner as your house sigil you should probably back it up by actually fucking shit up.

None of this is to say that the piece isn’t enjoyable – it is intriguing, and leaves the listener wishing some elements of the work were explored. It’s just that such a ballsy quote suggests a truly revolutionary content, and there’s nothing that hasn’t been done by other artists. Disturbed Communication has attitude behind it, but it doesn’t kick the listener in the ‘nads, at least not in the recorded artifact. Live may have been a different experience – but on record it sounds like a first sketch, albeit one with evocative moments.

Got more nice CDRs from the German label Attenuation Circuit from 28 November 2013. One of them is part of their Concert Series, and it’s an exceptionally fine volcanic eruption of delicious semi-dangerous noise performed by a noise “supergroup”, of sorts. The team of elektrojudas, Sustained Development, Kim Jong-Un and EXEDO call themselves Knark Esion, and their Disturbed Communication (ACC 1010) is a lovely wodge of dynamic, rough-edged and snaggletoothed improvised blat. How long have this quartet been working together? They’ve already got it down; no meaningless, wasteful feedback blather or egos getting in each other’s way. Instead, taut discipline and high-performing band dynamics are the watchwords. Through combined synths, electronics, drum beats, voice samples and guitars, frightening images of destruction of instantly evoked, including the usual hideous fantasies I am regularly haunted with – collapsing buildings, attacking helicopters, and a general brouhaha among the populace. As observed, I wouldn’t want you to think they’re just creating 25 minutes of formless howlage, which as a genre has been done to death since 1990 onwards in any case; instead, they leave enough space for all the broken pieces of the jigsaw (very large pieces, probably made of concrete or steel) to lock together effectively. Except that the jigsaw, when assembled, makes no sense whatsoever to eye or brain. There’s also enough space for the listener to insinuate self into gaps, providing that is you don’t mind near-misses from runaway trains, being scorched by blasts of flame, scathed by falling boulders, or nearly being munched to a pulp by large electronic crocodile teeth. I’m clutching at images of violence and broken-ness to convey some of the sense of this electrifying performance, but even so I can’t seem to encompass the grandeur and towering melancholy which its creators share, creators who start to assume the proportions of disaffected Pagan gods, tearing their own creations into pieces and howling into the cosmos as they do so, before retiring to some nameless Valhalla to drink red wine from the skulls of the fallen. The label notes allude to “the use of noise as a sabotage of cultural codes”, a subversive approach which is well and good, but I think Knark Esion are aiming for something far less cerebral than that, and this is the sort of powerful grotesquerie that really feeds the fires in your bones and your belly.