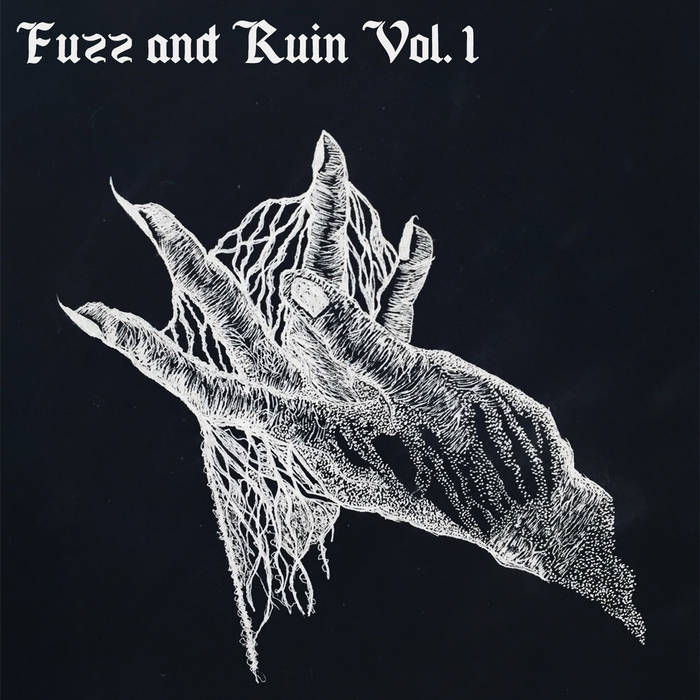 Heddbuzz (I.R. Puffinstuff) Was already a Klandestin fan - have their cd - before stumbling across this killer comp featuring more heavy bands from Asia. Favorite track: Doomsday.

Fuzz and Ruin Vol.1 is a compilation of eleven doom, stoner, sludge, drone, and psych bands from around the Asia Pacific region including China, South Korea, Japan, Indonesia, Malaysia, Cambodia, and New Zealand assembled for Cassette Store Day 2020. Covering a whole spectrum of heavy, tripped out, foreboding tones and spanning multiple national borders, this cassette serves as a document of bands from around the region united in celebrating the mediative power of cranked amps and voyages into the mind’s eye.

Klandestin (Indonesia), a trio who deal in slow, heavy stoner doom that fans of Sleep will instantly appreciate for their ponderous beats that rise and fall like mountains and valleys, dark guitar and bass riffs dripping with fuzz, and vocals extolling higher visions of the universe, either from atop a holy mountain or a sofa that has seen and heard a lifetimes share of intoxicated ramblings.

BlackBugfilm (Japan), a psychedelic shoegaze trio with an injection of punk adrenaline, eschewing introspection in favor of high speed passages through time and space, crashing down to Earth in a barrage of distortion, reverb, and explosive beats.

Electric Lady (China), a band who work from the classic blueprint of Sabbathesque blues infused doom rock, with swaggering riffs, deep grooves, and soulful female vocals telling tales of wicked deeds and sci-fi daydreams. There’s no smoke and mirrors with Electric Lady, they lay it all out there, staying true to form complete with flared jeans and SG guitars.

Drugnoose (Cambodia), a death doom cross over band spawned by boredom and chaos featuring members of Reign in Slumber and Vartey Ganiva. While this was a studio only band they are none the less a noteworthy addition to Phnom Penh’s close knit and deeply underground heavy metal scene, with tripped out synths and blood choked howls swirling over crushing blows. In addition the artwork for the compilation was created by Cambodian musician and artist Vanntin Hoeurn who is also half of Drugnoose.

Never Before (China) lay claim to being China’s first doom band and have toured relentlessly around the Middle Kingdom spreading their gospel of molten tones and apocalyptic sagas belted out into the abyss. Self confessed tone chasers the dual guitars of Never Before weave in and out of one another like a poison spider’s web, while the drums and bass lay down bulldozer grooves, a mountain from the peak of which guttural vocals worship sacred fungi for opening the door to church within.

Gawthrop (South Korea), a sludge metal band spawned from the gutters of Seoul. In defiance against all that glitters and sparkles Gawthrop are unyielding, hulking, and offer no compromise in their bone crushing barrages that have shook the walls of many a basement club around the Korean peninsula.

RST (New Zealand), a garden shed psychedelic space drone project that over the past twenty years has toured the world, cranking amps to the max, staring into space, in salute to the great infinite abyss. While RST incorporates ambient influences into his sound, make no mistake that this is a sound that will blast you to the moon and back.

King Of Lazy (China), a recent addition to the Middle Kingdom’s stoner sludge doom scene representing the haze and blurriness of Yunnan. Their sound is one of articulated dynamics; hypnotic grooves, clean tones, and droning vocals lure you into a false sense of serenity before giving way to howls of damnation over crushing walls of fuzz erupting into blinding breakouts that the likes of Pentagram would be envious of.

COMA (Malaysia), an experimental doom project from George Town who take a more avant garde approach to the genre conjuring otherworldly tones, syncopated beats, and orchestral utterances to create a rich tapestry of dread and gloom, wrapping around you like a twilight blanket in an age of ruin.

Nekroma (China), a doom/post rock band featuring members of Guiguisuisui and math rock trio Nakoma. Rather than using a regular electric guitar Nekroma’s riffs are tortured from a one string skateboard instrument (the Diddly Board) or a lapsteel, blending with pulsing drums and grooving bass lines and synths over which soaring lamentations drift.

Alpaca (China), a staple of Shanghai’s heavy metal scene and strong presence in China’s stoner sludge doom scene. Drawing on a range of influences and sounds including stoner and occasionally black metal, blues and desert rock, and hardcore, Alpaca dealt in a wall of sounds that shook brain particles to take audiences on mystical journeys into the desert within.Having departed China and called it quits for now it was only fitting that Alpaca should close out this compilation.

The inspiration for this compilation was the 2008 documentary ‘Such Hawks Such Hounds’ by Jessica Hundley and John Srebalus (www.imdb.com/title/tt1377796/) which chronicles underground psych, hard rock, and photo-metal bands from the ’70s to mid 2000s, with a focus on how the arbitrary labels that might be placed on these artists often blur and seep into one another. Daftpop Sounds decided it would be a worthy endeavor to help tell a little bit of the story of heavy bands in the Pacific region that share a commonality in sound and approach and set about collecting tracks from as many artists in different countries to release for Cassette Store Day 2020. An important note is that this compilation is in no way exhaustive and only documents a very small fragment of the scene that Daftpop had contact with, hence why it is labelled Vol.1 in the hope that subsequent editions can help cover more bands from around the Pacific region.

This release contains an amount of ROCK that might be surprising in the context of attenuation circuit's experimental music roster. But the genres represented here are truly underground varieties of rock, which safely connects them to the ethos of attenuation circuit. Furthermore, this compilation aims to bring to a wider audience music from a part of the world that's usually not in the focus of, say, European and American audiences. This spirit of international collaboration is, of course, part and parcel of nearly everything happening on attenuation circuit. Curated and released by members of Beijing-based experimental duo GuiGuiSuiSui, this nice little tape is exactly what the attenuation circuit staff like to bang their heads to, beer in hand, after a long day of tirelessly executing world domination strategies in the highly competitive, billion-dollar drone music market. ;-)

If you like Fuzz and Ruin Vol​.​1 - Stoner, Doom, Sludge, Drone, and Psych from the Pacific Region, you may also like: