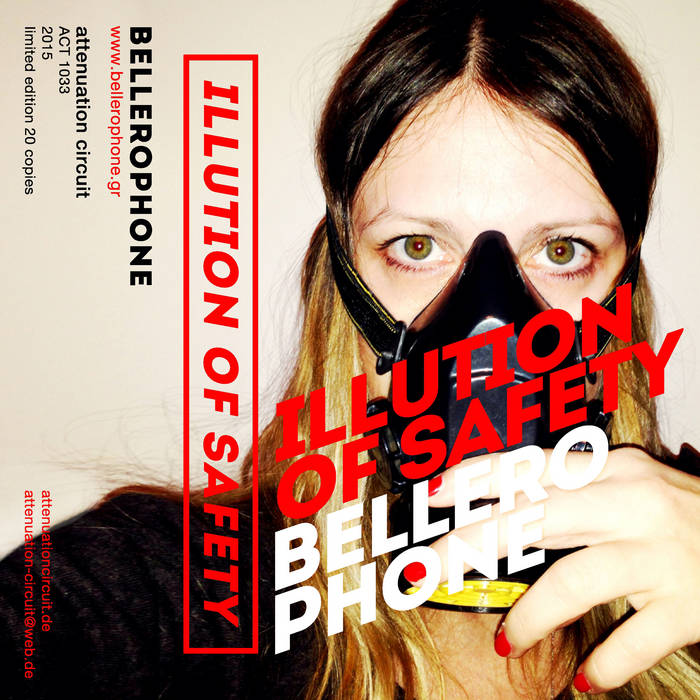 Artwork and design by Georgia Simogianni; photos by G. Simogianni.

That safety is an illusion is something that people in Greece have been learning the hard way through the last few years of economic crisis – perhaps this is why Greek artist Bellerophone gives a rather grim twist of black humour to his title borrowed from a post-industrial household name by misspelling it and putting the release in a sleeve boasting that most clichéd of “industrial culture” clichés: the gas mask.

The music, though, is far from a blatant parody. Using a Roland System 100m modular synthesizer, a Roland RE-201 Space Echo, the MoogerFooger ring modulator, a Boss digital delay, all recorded on an Uher 4000 Report Studio tape recorder, Bellerophone creates high-frequency fields of interference which invoke a certain claustrophobia, even giddiness or vertigo, all of which creates a pretty convincing aesthetic approximation of having the floor removed from under your feet. Which is something that proves safety an illusion. Or illution, for that matter.

Ra Sonologyst:
Industrial release by Bellerophone from Greece. A two tracks work produced on cassette, as usual, by Emerge Attenuation-circuit. All analog synth and tape recorders lovers will find bread for their teeth listening to the claustrophobic stream of sound of this artist. Probably one of best into recent label production.

The Illusion of Safety sounds like a undermining soundscape that will infiltrate the safe surroundings of a quiet but slightly windy afternoon. The tickers attached to the outside of the roof are suspiciously ticking its way through the beginning of the scene, faithful people might think that this is the alarming sound of spirits arriving..

It is funny to me as some superstitious people outside my reviewers place have exactly the same tickers outside, and they fit excellent with the ones captured on this release. It’s nice (for me) as the soundtrack removed the tickers till continue to tick..) and replace the scene with a warm buzzing form of probably synthesizer safety. It’s nicely buzzing in a homogeneous way, like a slow motion roller coaster ride that never goes for the upside down circles but more just goes a bit up and down and to the sides. Wiggling like this in slow motion the music brings me back in to a baby’s crib; just stick your own thumb in your mouth, find the comfort of safety and perhaps do a little nap…

In the back a strange electronic sound is brought in. Is it a telephone that rings, or perhaps a fax machine? A higher sound also joins the synthesizer sound of safety… Is it a infiltration of the safety sound by some unsafe measures? Before being able to ask too much questions the telephone-fax-machine-device goes a little cuckoo and it proofs that indeed sometimes when you think something is safe; it might as well be unsafe. Your hair might have been eaten by the fax machine, or you accidentally called hundred people at the same time with the telephone… Safety first!

And safety second! The Illusion of Safety continues with a new start, claiming a very safe sounding soundscape that is of the kind of industrial-ambient that has ‘safety’ stickers all over it. Sure, you can trust this part of the trip… Well, even though it all sounds relaxed, under control and very safe; the opposite of safety might be just around the corner…

Slow hints might flirt around , but if your lights don’t work, or you didn’t wear head gear protection, steal safety boots or (just in case) a safe gas mask the disaster of a accident might simply roll itself in without any real warning. But you’ll notice as the unsafe sound will go straight to your head, slightly messing up with the heartbeat and twirling the ears with a unsafe sounding sound that gets more unsafe as we go on… Hearing damage might even kick in, but for the well trained noise ear the damage of unsafe sounds might be limited… It’s the exposure to unsafe high tones that might do the worst damage over here, but if you have already ruined your hearing ways; you’ll probably don’t even hear it! Better prepare yourself, eh? The safer you are, the more the illusion of safety can’t harm you!
<KN>