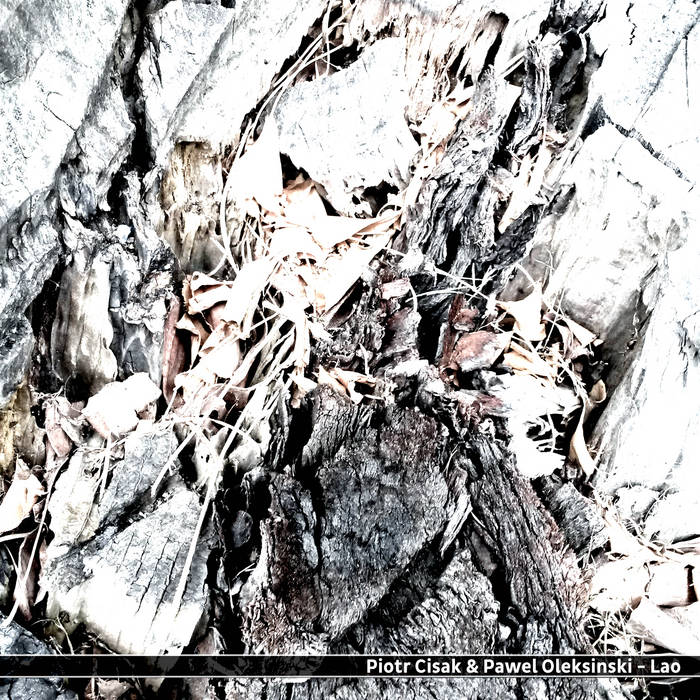 Two sides of hauntingly beautiful, gloomily intense yet subtle dark drone ambient. The composition “Lao” is presented in two versions here, one for guitar and bass only, one with an added viola part.

Piotr Cisak (bass & effects) and Pawel Oleksinski (guitar & effects) create a deep dronescape, a slowly moving mass of sonic magma that threatens and fascinates at the same time. Field recordings by Cisak are added to this, and the fact that they give us rather naturalistic birdsong adds a surreal dimension to the imaginary spheres evoked by the drones – which makes the whole mix even more powerful and sculptural. “Lao (rework viola)” is another version of the same piece where Cisak and Oleksinski are joined by Dorota Mortek on viola. Instead of playing along with the drones, she creates small flourishes that rather blend in with the birds, thus creating an intermediate structural layer. A masterpiece of analogue drone music.

The only drone that is a good one, is the one that comes in music form & instead of flying over, flows calm and nicely into the ears, creating some kind of natural biodome behind the temple of your face. Lao by Piotr Cisak & Pawel Oleksinski is such a drone that does exactly that; it goes in and sets up a biologically correct self-containing atmosphere of plants, nature, birds and lots of fresh heavy air.

With deep depth the source of this life in drone form settles down in the brain, providing oxygen for all the new life forms that chat like birds within the head. It’s a wonderful world that Lao will setup, so pretty that you would expect a sweet voice and a strumming guitar to make an appearance & in certain ways that wish could also be granted. (…or that happened in my listening session as I was accidentally also playing another release that I had forgotten about…)

In a way you could sing (if you have a nice voice) on top, mixing the sounds that play in your head with the external sound that would escape the lips on your face. Or you could play an instrument to join the atmospheric atmosphere; options are endless… It is not necessary though as it is already impressive and lovely as it is, besides violin player Dorota Mortek would come and play on top of this pretty happening. What you could expect is a musical add-on of a melodically expressive violin. This is a lovely rework to the inner-head biosphere drone, giving the nature within this work a really smooth touch of bonus music.
<KN>
yeahiknowitsucks.wordpress.com