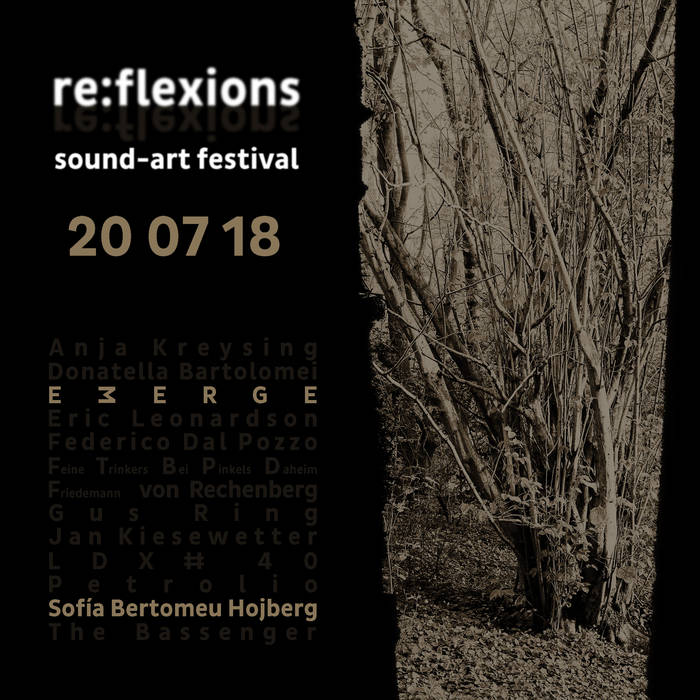 SOFIA BERTOMEU HOJBERG (Murcia)
My projects concern issues such as “dissolved identities”, “dissolved spaces”, deep and hidden emotions, abstract landscapes within wider areas (museums, bodies…), conceptual and thematic Soundscapes and Portraits. The usage of the term “Scape” as a double-way meaning; As a landscape shortening and as an actual escape from our own’s reality.
I use Photography, Painting, Sound Art, Experimental Music and Drawing in order to approach these concepts and materialize them through a tangible matter.
I usually mix those media for certain projects.
www.facebook.com/SofiaBertomeuArt
sofiabertomeu.bandcamp.com

Sascha Stadlmeier (b. 1977) has been releasing electroacoustic music with his project EMERGE on international labels such as Drone Records, Tâalem and Frozen Light since 2001. A composer working at the intersections of musique concrète, drone, and noise, he has also been an increasingly active presence in the field of free improvisation since 2016. In addition to live electronics, his improvisation practice involves guitar, bass, and amplified objects. Collaborations with other musicians from a very wide range of styles form an important part of his work, with collaborators including If,Bwana, Doc Wör Mirran and Toy Bizarre. He has been touring Europe extensively, with concerts in France, Belgium, Italy, Switzerland, Austria, Poland, the Czech Republic, Slovakia, Hungary, Slovenia, Serbia, and Bulgaria. His music has been presented at many international festivals including Avantgarde Festival, lab30, 20 years of MGNM, Zasavje Noisefest, Ecological Sound of Varna Fest and Autistic Campaign Fest. While a prolific composer and performer, Stadlmeier has also created various sound installations and a radiophonic composition for West German Radio's renowned Studio of Acoustic Art. Since 2010, his label attenuation circuit has established itself as an important hub in the international experimental music scene, with releases by more than 100 artists from numerous countries to date. attenuation circuit also regularly organises concerts of experimental music at Stadlmeier's home base in Augsburg, Germany.

I’m not sure if any of you are familiar with sound art? I mean it’s a term we have seen being splashed around as a genre, but it’s mostly in combination with other keywords, creating some kind of melting pot to confuse people about this thing that combines art with sound. In fact it made me think that Sound Art was a non existing thing, like a hipster way of saying things.. just as silence being some hypocritical term of something that does not exist either: ever closed both ears and hearing still nothing? Impossible! (Or is this just me pointing out that my ears are broken and equipped with a permanent hiss from the inside out?) In any case; now the table of opinion on sound art seems to have turned around for me, as this recording of the live performance by Sofia Bertomeu Hojberg & EMERGE is in fact (I guess – as I’m no expert..) purely sound art.

It’s as if these two artists had seen the environment that they performed in as their canvas & brought in a whole collection of carefully sampled sounds as their buckets full of paint, ready to be painted through the audio waves. They do not seem to mix their brushes up with ‘outsider’ colors like ambient music, synthesized drone or breakbeats; they refrain far from any of the mix matched media style that is easy and focused purely on the art of using sound as art. It’s no pop art; contains no bright flashy colors that takes a provocative piss on society, neither is it framed in a self shredding frame to question the business side of art in general. Stirring up a modem day buzz on social media leaving real important issues in the dust…But art it is!

It is quite a minimal work, like a landscape painting that is sober and traditional, but because of its purity (refraining from flirting or dabbling with any music forms) there simply has been something here that feels conceptual-wise as something that is so purist, that it could bring the highest sound or art sceptic into a turnaround. It could be showcased in classrooms of art and sound schools as a great efficient example of sound art & perhaps also simply as to proof its important point that it exist. That it is possible to sustain from music and paint sound art for a great amount of time, without sounding as if something had been missing something.

The great thing that Sofia Bertomeu Hojberg & EMERGE have done here is their consistent consistency to provide at least half an hour of recorded sounds and bringing them together as a long artwork to stare away in. There is plenty to hear, yet their style of painting with sound is so very nicely spread out, that they are giving the art admirers a lengthy panorama that isn’t confusing, as the piece is focusing on one point before going on to the next. I could note things down here that we could hear when staring empty headed into this piece of art, but in this case there is plenty of things to note down sound-wise that it should be up for interpretation to whoever is interested to hear / see such a thing.

I think it’s good to see it as one concrete work, or face the risk of becoming some kind of bird spotter that tries to name the ‘sounds’ aka the paints that made this work. You wouldn’t approach a traditional painting like that as well: naming all the colors on the canvas would be a well silly killjoy to do… occult green / ocean blue / sniff of orange peel orange / drop of cat litter brown / almond milk white etc.. hmm maybe not so silly after all! Anyway; sorry no time to do such a thing over here!

Great thing about this being released as a audio track is that you won’t need to go to a museum to check this piece of art out, leaving your reputation as a ‘ culture barbaric’ safe and sound, as you could enjoy this work in all discreteness from wherever you feel it’s safe to hear such a thing without being laughed at by your punk friends or being looked down by a couple of art snobs. My recommendation is to go for it from the comfort at your home, doors locked, lights dimmed and the volume up. Nibbling on caviar and drinking piss poor quality beer as to respectfully approach this work of sound art with the right decadent punk attitude that it secretly deserves. Here art and sound lovers, hear sound art as it is: