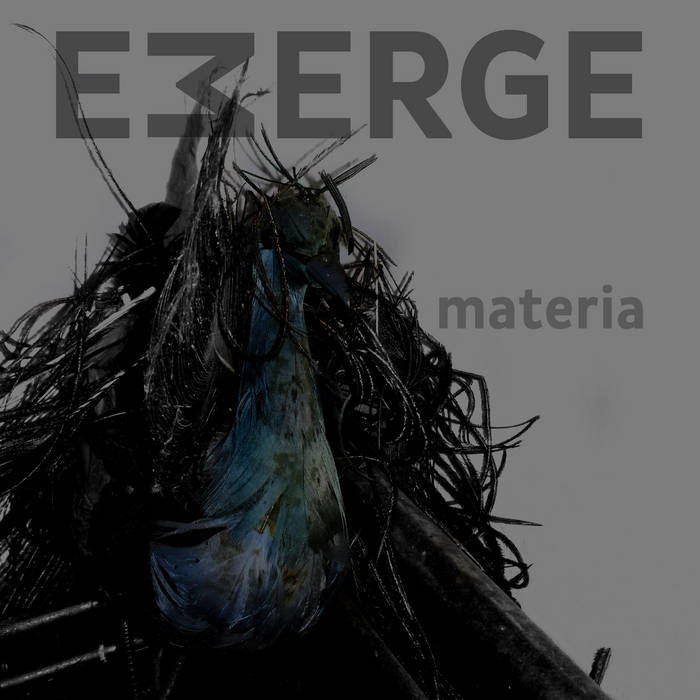 Attention, folks, you're in for a paradigm shift. EMERGE has become a household name in the international experimental music community as a composer mainly associated with drone and musique concrète. This album is bound to change your perception of EMERGE quite a bit. This is probably the most rhythmic release by Sascha Stadlmeier since he shelved his early project Dependenz and started to record and perform as EMERGE. And with its transparent sound and very direct compositional approach, it is both accessible and challenging at the same time.

The album, which manages to pack a variety of ideas and dramatic tension into its crisp 31 minutes, was recorded live in Poznan, Poland, in January 2018. EMERGE improvised with prepared samples and amplified objects made of various materials – hence the title – , namely wood, stone, and plastic. While the use of such basic, scratchy, even harsh sound sources is nothing new in EMERGE's work, the way in which he uses them here certainly is. They are often used to generate rhythmic loops that create downright beats, moving the piece to the brink of IDM or minimal music structures, but then collapsing such expectations by falling silent and moving into another direction altogether. While on the one hand silence is often used as a structuring medium, the drones so familiar in EMERGE only come into play as sound-effects that add colour to an otherwise monochrome palette. But this sparseness makes the compositional structure easy to hear and understand and certainly makes this album a perfect introduction for interested, yet inexperienced listeners who want to get into electroacoustic improvisation. More surprising than the rhythms, perhaps, is the direct, almost in-your-face way in which distorted voice like samples are used as a counterpoint to the live-generated sounds. They are used in dramatic gestures that almost resemble pop or rock dramaturgy, yet still are used sparingly enough so as not to become clichéd. This masterfully balanced mix of stylistic elements makes “materia” an important addition to EMERGE's large body of work, if not a milestone.

These days much of the catalogue of Attenuation Circuit is available as a free pay-what-you-want download and it something of a surprise to receive a CDR by EMERGE, which is one of the strong forces behind the label. There have been lots and lots of EMERGE releases and over the years the music got better and better. I wrote this before, but it has been a while so I'm saying it again, but in some way, EMERGE reminds me of a rough version of Asmus Tietchens. Whereas the old German master is very quiet in his music, certainly in recent years and relying on analogue technique to process his sounds, EMERGE is someone who uses two samplers, fed with field recordings that are worked and re-worked on the spot. 'Materia' is made with sounds from materials such wood, stone and plastic, but nothing as such can be easily recognized in the thirty-one minutes of this piece, which is a live recording from January last year. The overall mood of the piece is quite dark, with those sounds slowed and pitched down. Loops of smaller and longer variations are used here, subtly moving along each other so that there is never a 'proper' rhythm going but rather sounds like the moving of ice plates on a frozen pond. It is a curious form of drone music that lacks the long form, ongoing sounds that are more common with drone music. Through the various movements are quite slow in development, but just in the right moment EMERGE changes his music ever so slightly and moves to the next set of variations. This is a damn fine piece of music, and it is easy to understand why he wanted to release this on a CDR. (FdW)

Sascha Stadlmeier aka EMERGE is a German electro-acoustic music composer who runs the Attenuation Circuit label that brings together experimental music artists such as Artificial Memory Trace, B°tong, Doc Wör Mirran, If, Bwana, Nocturnal Emissions, PBK and EMERGE, whose proposals unfurls genres such as drone, electronics, electroacoustic improvisation, musique concrète and noise.
"Materia" is a live performance recorded in Poznan, Poland, in January 2018, and a solo 31 minutes long track, in which Stadlmeier worked with found objects, samples and drones.
Silence is also a texture that is present in this limited run CD of 100 copies and is a preamble to the amplified sound objects made of different materials that are building a subtle rhythmic session. It is appreciated at 8 minutes of the track, processed voices that give a dark and disturbing nuance. Meanwhile, a background sound is wrapped in a loop. Then, sound forms intersect in the enigmatic sound space.
Stadlmeier produces complex sonorities that invite us to move into new directions.

Emerge are a solo project from Germany that has had music recently reviewed in this zine and on this recording plays a mixture of experimental, electroacoustic, drone, idm, improv and minimalist music and this is a review of his live 2019 album "Materia" which was released by Attenuation Circuit.

Field recordings start off the album while the live set is over 30 minutes in length along with some voices also being utilized at times. A great amount of experimental and avant garde elements can also be heard in the music and as the tracks progresses traces of idm are added into the music.

On this recording Emerge plays a musical style that takes experimental, electroacoustic, drone, idm, improv and minimalist music and mixes them together to create a sound of his own and the production sounds very dark with all of the music being recorded live.

In my opinion this is another great sounding recording from Emerge and if you are a fan of experimental, electroacoustic, drone, idm, improv and minimalist music, you should check out this album. 8 out of 10.

Emerge is a widely known ambient / drone act from Augsburg, Germany. Emerge is operated by Sascha Stadlmeier, a very prolific multidisciplinary artist who also runs Attenuation Circuit, a brilliant avant-garde record label with dozen of exceptional artists on its roster. I’ve encountered his live performances a couple of times and with great assurance, I can affirm that Emerge is one of the best ambient/drone artists I’ve had a fortune to experience in person. Emerge pays attention to every feature of his music, from sound sources, recordings, producing and mastering to magnificent contemporary artworks essentially composed of numerous textures or macro details. Besides audio and visual aspects of his recordings, Sascha also spends a lot of attention on the quality of his records so both vinyl and compact discs are professionally duplicated in duplication factories with heavy cardboard sleeves. Whoever even scratched the surface of avant-garde music, probably knows that’s not the case with a vaster portion of other artists. Materia is one of his latest offerings to the wider audiences and this album consists of a singular composition that endures for about thirty minutes or so. Actually, this is a live recording of his performance at Schron Club, located in Poznan, Poland. Materia commences with some strange percussion loops which have been pervaded with subtle doses of the delay effect. Emerge has obviously used this part as an overture to the next sequence of his performance. The development to the next segment is still calmy, but with a dose of eerie ambiance in the background. It sounds like a wandering throughout the misty swamp in the middle of the dark, searching for the easiest way out from the eerie atmosphere, but these noises are becoming even louder and louder. Emerge relies on the sheer minimalism which transmits a sense of hopelessness. All of a sudden, percussions are fading out, but the horrific ambiance becomes even louder. Emerge brings all the elements of horror soundtracks by exploring throughout the vast space of ambient and drone music, but he also adds up some elements of musique concrete to the bill. His focus is clearly on a minimalist approach to these genres, but Materia sounds so vibrant, dynamic and entertainful throughout the entire composition. Materia is still available at the Attenuation Circuit Bandcamp page, so I highly advise you to grab this CD while it’s still available.