music for a new dark age 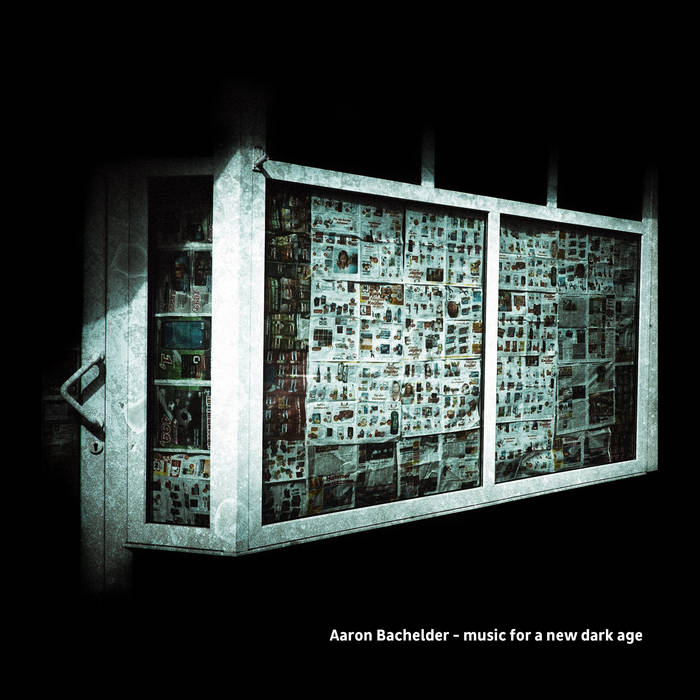 Aaron Bachelder is a composer, songwriter, educator, and multi-instrumentalist residing in North Carolina. A composer of experimental, process-oriented electronic works as well as songs that largely defy categorization, he has also served as drummer and percussionist for acclaimed bands Clare Fader and the Vaudevillains; the Darnell Woodies; and currently, the legendary Eugene Chadbourne. Additionally he has performed and/ or recorded with Choptsicks, Jeffrey Dean Foster, Martha Bassett, violin soloist Sarah Johnson, and many others. Founder and director for eighteen years of the Enrichment Center Percussion Ensemble (ECPE), he revolutionized what music-making with adults with developmental disabilities could be, challenging audience expectations through performances and recordings. He has spoken on his work with the group at professional conferences from Florida to New York, and received both the Winston-Salem Foundation’s ECHO Award and the NC ARC’s Teacher of the Year Award. With the Spool Ensemble, Bachelder has made improvised music as percussionist and electronic musician for over twenty years. His music has been recorded on Albany International, Microearth Records, and other labels. Additionally, he has written music for commercials, documentaries, and early childhood educational computer gaming systems. In 2015, he served as co-producer (as well as performer) of Microfest Winston-Salem, presented by the American Festival of Microtonal Music. Most importantly, he is a father, husband, and companion to dogs.

If you have been following the news you might get the impression that a new dark age is knocking on our doors. You don’t even need to open it as such a thing cannot be stopped by closed doors. A new dark age might not sound like a very positive and fruitful time period, however out of shitty times always good unexpected things will pop up and flourish. This amazing intriguing and quite frankly fantastic sounding album by Aaron Bachelder is a great example.

Music for the new dark ages by Aaron Bachelder is so original and equally surprisingly beautiful that it will simply shine a bright light on the prospect of these dark ages. The music is clearly created in it’s very own unique way, one that is so good that you almost would wish that this new dark age would properly settle in quickly just so you could completely hear this album at the right time & perfect atmosphere…

Trust me, the sounds are extraordinarily, nonstop different & yet it all seems so compositionally right; brilliance think of a future in which traditional instruments are abandoned and magically friendly intelligent robotic lifeforms have become the music instruments & composers at the same time.

The music that they produce is unclassifiable, borders genius mentality, takes on a great journey, one set to entertain by bringing the material of comfortable listening towards you the actual potential listener. With the sounds of the unknown that travel beyond genre into unexplainable beautiful captivating composing structures you will be too busy enjoying to even think about how the entire age has become darkened…

…in fact, when I did the pre-listening session for you, the world had become dark, but not because of the colorful sounds and strange sense making music; but my eyes closed, dreaming away in pure bliss as I fell asleep peacefully! These upcoming dark ages aren’t so bad!

A new name then, Aaron Bachelder, and that is a very German sounding name, I think, but he's in fact from North Carolina where works as a composer, songwriter, educator and multi-instrumentalist. As a drummer he plays with Clare Fader and the Vaudevillains; the Darnell Woodies; and currently, the ever lovely Eugene Chadbourne, as well as improvising with others, recording music for commercials and releasing works on Albany International, Microearth Records, and other labels. And yet, I never heard of him. The four pieces on this release have very little to do with the world of drumming or percussion, and all with the world of electronic music. I couldn't say if this is the kind of modular synthesizer set up or something else, but I wouldn't be surprised if it is. The music of Bachelder seems very formal in a way, thought out. Like Jos Smolders last week, it might very well be that Bachelder sets out a few parameters and within that he finds his operations. Sounds are short and without much sustain, like small, overlaying blocks, in patterns that are a constant change course. It has both a mechanical feel as well as a human feel. It owes, as far as I can see, more to the world of serious composed music from the 60s than the current day trends of modular synthesizer playing 80s soundtrack pieces, the current popular genre (for some), or those who do another imitation of Tangerine Schulze. I must admit I didn't understand the title very music, as yes, I agree these times look grim, but this music can cheer you up; well, in a kinda of grim way. I for one thought this was a very enjoyable release.
(FdW)