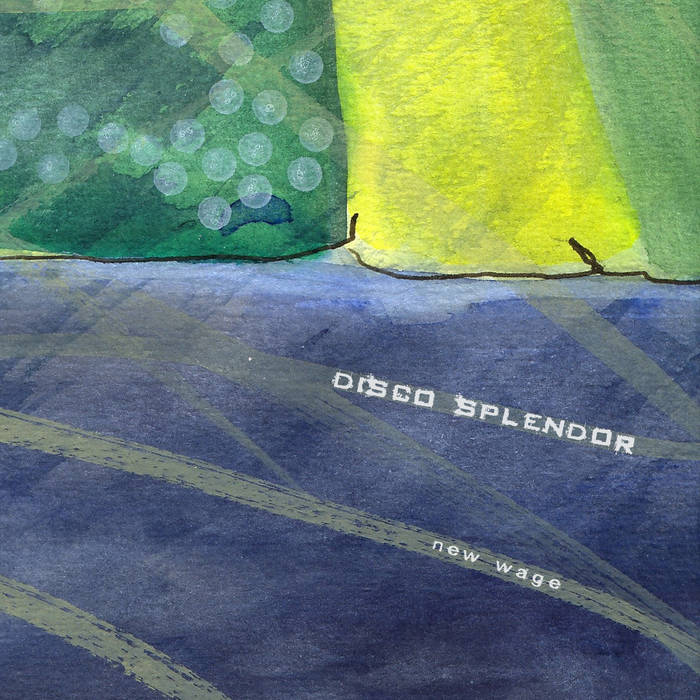 all sounds by: PBK & MINOY

“Disco Splendor was an experiment in absurdist noise,” PBK describes his first collaborative project with the late Minóy (1951 – 2010): “PBK & Minóy, searching for the most irreverential noise music, unconcerned with aesthetic value, stumble upon something greater than the sum of its parts.” New Wage, an “epic montage of shortwave radio juxtaposition and crackling lo-fi noise” (PBK), recorded in 1988, is now one of the rare Minóy recordings available today as the original cassettes from the 80s are extremely hard to find and there are currently no other physical releases available from Minóy except for those on Attenuation Circuit.
Recalling his mail-art tape collaboration with Minóy, PBK recalls: “Collaborating with him was an overwhelming experience, but I don’t think he trusted me at first, he asked to keep our first collaborations anonymous and we created together a ‘hoax’ project called Disco Splendor. The aesthetic that we determined for this project, that of repetitious, banal, meaningless noise was a kind of quest to find out just what ‘flew’ in the cassette underground, what would be denounced as ridiculous or dreadful in this new world? In those days there was no blueprint for what any of us were doing, there had certainly been assimilations in rock music of the experiments of Stockhausen, Pierre Henry, or John Cage, and we knew of those things, but what we were doing with noise had not been tried to such an extreme. There was no internet and it was very difficult to find out what others were doing concurrently that might be similar to our own (and when I say “we” I am talking about a number of artists, a certain zeitgeist happening simultaneously in different parts of the world). Ultimately, Disco Splendor proved nothing if not that the ears and minds of the artists and fans of experimental music were wide open to new possibilities, and even the most excessive sorts of approaches. So, the project was put behind us and we worked from then on as Minóy/PBK.” A CD-R reissue of the Minóy/PBK tape “Cloisters” can be found on ACR 1025.

It seems by now that a large portion of interest from Germany's Attenuation Circuit is reserved to re-releasing music from the past, mainly 80s, mainly from the USA and which was mainly released on cassette. Music from the active lot Zan Hoffman, PBK and Minoy. From the latter two there was already a re-issue 'Cloisters' (see Vital Weekly 858), but this one, as Disco Splendor came before that. PBK suspects Minoy didn't trust PBK that much, so he asked him to use a band name, hence Disco Splendor. PBK is now not sure, as Minoy passed away in 2010. Maybe the the two of them didn't feel confident enough to by their real names. They did however after that. A lot of what happens here is based on the use of shortwave radio sounds and sound effects (ab-)use. Two tracks, both around the thirty minute break, indicating that this was a C60 cassette at that time, and it's along the lines of 'Cloisters'. A heavy yet minimal sound of processed radio signals, all layered together and thus creating a more industrial than ambient sound. Unlike 'Cloisters' which seemed somehow a bit more subdued in that respect. Now here we don't have something that is entirely worked out, composed if you will, but more in a surrealist stream of unconscious sounds, that endless barrage of cluttering static. Mumbling voices in the first piece, machine screaming in overload in the second - both untitled. I think 'Cloisters' was already more refined, but here we have a fine start. Essential for those who want to take that deep plunge into the vaults of industrial music, released in a small amounts on cassettes. Only in the 80s. (FdW)

Disco Splendor spreads out a pastry of sound that is thick and crunchy. The crusty feel is a bit chopped as if the recording is recorded through the turning propellor blades of a helicopter. It’s also loud like such a helicopter, so it might not be a all too weird comparison. Through this steady feel of helicopter noise, music is being received as well as communicative radio chatter. It has something militaristic and yet carefree and jubilant. Not the whole time perhaps as the noise is quite grilling in its workings upon the ears, and it might be a good idea to wear a helicopter helmet with ear protection before playing this album, but if not; you are definitely an instant hero!

I’m not so into video games, but I remember old school flight simulator. If there is such a similar thing with a helicopter to play, it would be an excellent idea to play the game with this album as the soundtrack; it will definitely add a great deal to the real experience of it all.

The other part of the album keeps the helicopter vibe, but has a slight more grimier perspective in the sound and feel. Some classical opera music might be waved in, but it’s the spiral of tonal windy noises that would lead the way. Not sure if the way of the flight is one of going up or in rapid speed going down towards the earth’s surface, (maybe it’s both!) but it’s for sure not a smooth ride. In fact it’s easy to imagine that the pilot plays the classical opera just to try to calm down the situation, as it’s evident that there might be a hard landing through the bad weather. As a listener at home I feel solidarity with the Helicopter trouble, digging my sweaty hands deep into the arms of my chair; let’s pray for a happy ending!