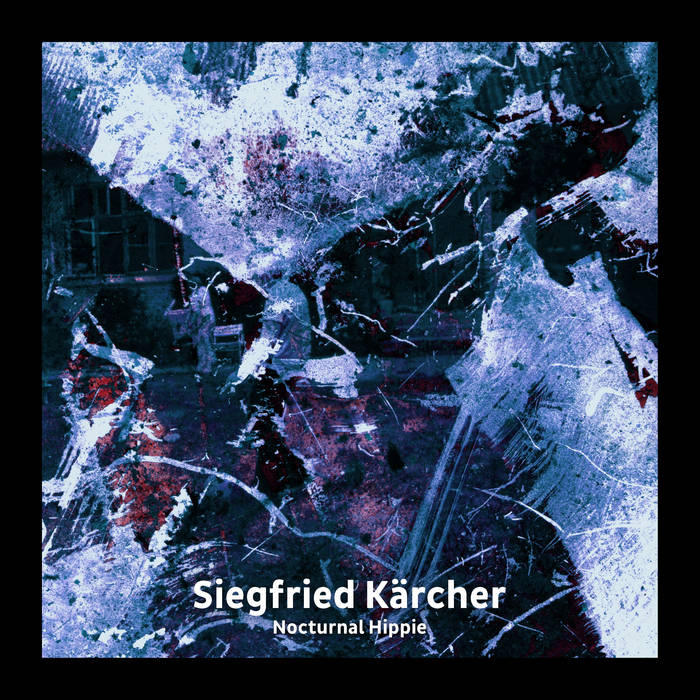 Also Siegfried Kärcher might be a new name for me. There is not yet information on the website and there is none on the cover. There are seven tracks on this release, of which three are over ten minutes. I have no idea what Kärcher uses, but judging by the music I would think his set-up is electronic, including synthesizers, rhythm machines, samplers and sequencers. Having said you probably think this is all about techno music and it’s not, not really. The rhythms are a bit too slow for that and not always present, or even absent, such as in ‘Cem Church Cornwall’, which contains recordings of birds, a church and a deep synth tone. In the opening ‘Mertes Acker’ there is slow rhythm, much reverb and an interview with a football player, in German. Maybe that counts also as field recordings? In ‘Kupfer Und Jade’ there is an arpeggio synth and Kärcher plays with a more or less cosmic edge. It made me think that it seems that Kärcher doesn’t know what he should choose to play; a bit of slow dark wave rhythm, drones or perhaps a bit gentler, on the cosmic side. You could argue that there is quite a bit of variation on this disc and that’s true; it just didn’t convince me always, plus I thought some of the longer pieces were also a bit too long.

To Germany we travel for a new release from Attenuation Circuit; Nocturnal Hippie by Siegfried Karcher.

Siegfried Karcher is a multi-talented multi-media artist whose works have achieved international recognition. This includes numerous single and group exhibitions, audiovisual installations and live performances. But today we feature his new sonic release.

Albums like Nocturnal Hippie present a challenge to summarize in a paragraph or two. Therefore, in these cases, it’s far more appropriate to do a track-by-track analysis….

Track 1, “Mertes Acker,” starts with a field recording and what sounds like a German language voice sample. As the sample continues to dominate the track, it does so above a thin synth wave and steady electronic beat. Track 2, “Gutes Neues,” continues the sample but does so above an ebbing drone backdrop. We also hear an Obama sample and steady drone backed beat to the end of the track. Deep drones begin track 3, “Skgubadzidving,” as a voice sample seems to descent and be swallowed. Drone synths take over with a faded beat and close out the track.

Track 4, “Reise,” is pure synth/drone, dense and layered for the most part along with some minimal static-like noise sporadically placed. Track 5, “Kupfer und Jade” starts with a warm synth and what sounds like a rhythmic sitar then added to some choral sounding synths. The piece then becomes minimal and then puts the sitar sound against some quirky synth hits.

Track 6, “Cem Church Cornwall,”starts with a field recording, then a deep drone with some haunting angelic choral sounds buried in the background beneath a hypnotic synth wave. The field recording is the dominant piece but is effectively nurtured by some deep, low frequency drone and occasional choral hits. Bringing us to the end of the recording is “Light Fall Komposition 2.” Some middle-eastern sounding strings start the piece off, some in accord and others, discord. This track is far more experimental and dynamic than the others and has the artist playing more with a deep static noise and also periods where the sound drops off for the most part. Herein is a point that I think most artists fail to understand. That is, many times, it’s what is NOT there that is most effective in an experimental noise recording. Often the most poignant moments are when the sounds almost completely drop off occasionally. Guillermo Pizzaro is an excellent example of an artist who has mastered that. But while this piece is quite minimal, it’s definitely the most experimental of this album. It’s composed mostly of drone, bits of noise, ethnic string sounds and high synth-sounding strikes.