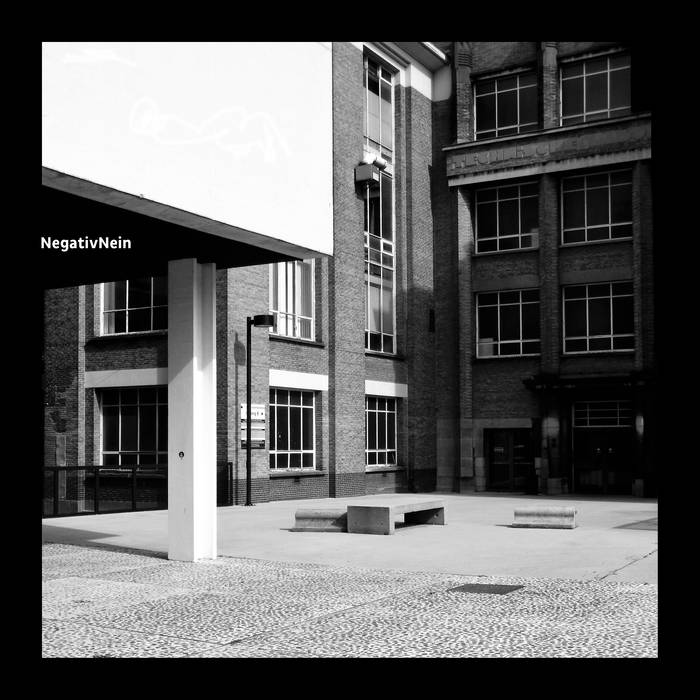 This recording is about what is not there; that which remains absent, has gone missing, is as yet still anticipated, or lies hidden in the in-between; undetected. It's about the way our senses and memories can reconstruct their own version of these absent presences, sparked by the contours of removed pictures on the walls of an empty house, the footprints suddenly encountered during a walk through a quiet forest, the vague, lingering resonance of something someone said that you didn't quite catch, or even the inexplicable sense of unrest pervading certain city street corners where perhaps, at one time, something eerie took place.

It's about allowing yourself to create a subjective narrative for what is not objectively there, relying on the fact that somewhere in this absence, an imprint has been left behind, an emptiness that becomes a new object in and of itself: where matter is inverted into void, and hollow spatial negatives of objects and events, both real and imaginary, are ready to absorb whatever we want to place inside them.

It's also about sounds that are only suggested by their acoustic afterglow, their echoes, their trembling overtones and harmonics. The sound of piano strings, for instance, right after you've pressed down the keys and can hear their individual sound waves intertwining into new, pulsating, aleatory patterns. Or the sounds within everyday sounds that go unnoticed until you pry open their trivial outer shell, slow them down, stretch them out or amplify them to reveal their underlying texture: layer after layer of disparate noises, none of them familiar or predictable.

And then finally, it's also about the true blanks, the hermetic, claustrophobic, walled up, closed down places where all traces, visual or audible, have been erased and every memory of them has forever dissolved. Where sine tones wash out all other voices, creating intervals of complete nothing, where the only sound left is perhaps that of your own ears, ringing.

But mostly, it's about the subtlety of the after-effect, about the movement of the ripples on the surface of the water, and not about the stone going in.

This recording is about the loudest, most resonating silences we know.

Instruments: a broken piano, a hairdryer, a bathtub, manipulated singing bowls and violin strings, lots and lots of field recordings (recorded with a simple Tascam recorder, sometimes using piëzo microphones), sine tones (made by attaching a pick-up coil to a cell phone)and Cin's voice. No electronic instruments were involved, we don't even have them.
Everything was assembled, arranged and mixed between May and December 2016

Is it a bird? Nope it is a word. One that gets repeated until it shows the way down into the deepest abyss of sonic goodness. This will open up a audio portal in which a delightfully kind sounding drone sound will show up, one in which you could carefully slide down into this other world in which warmness is as essential as the blending of psychedelics.

Here the trip kindly starts, one in which both ears (left and right) gets treated with only the best kind of audio crafting, with the kind of sounds that will make you go through a tunnel vision of pure hypnotic strengths. Slow slides of delight, thick and safe; relaxed flowing through the non existing rooms generated by the music that plays itself out in your own head. It’s so pleasant to be here and there deep down in the boldness of safety.

This music makes me feel like there isn’t the slightest thing that could go wrong, it is comparable with the act of being in someone’s good hands & companionship, while actually being all alone in this safety zone of moral ambient. No one will bother you here with chatty nonsense, except maybe just me… but hey; it will be nice to meet you over there within this audio realm… we can shake hands, hug and flow together in lotus position in pure silence. No need to talk, just fly away in peace through a lovely lala-land. One that feels like a gift from nature; deep and dense, fresh and gentle. When a lonely piano dooms up thrills hover down my spine; this is so perfect, who wouldn’t want to float here?

Behind Negativnein we find Sebastien Crusener and Cin Windey. The first is responsible for field recordings and sound manipulation and the second for piano and piano manipulation. The Bandcamp page lists a whole variety of instruments such as “a broken piano, a hairdryer, a bathtub, manipulated singing bowls and violin strings, lots and lots of field recordings (recorded with a simple Tascam recorder, sometimes using piëzo microphones), sine tones (made by attaching a pick-up coil to a cell phone) and Cin's voice” and it ends with “no electronic instruments were involved, we don't even have them”, which I guess is not easy to believe if you listen to the music. Should I not have read all of this, what would I have written? That is of course a question I can no longer answer, but I have a pretty clear idea. Surely I would have written something along the lines of drone music, played with electronic means, mixed in a gentle way with field recordings, especially of rain (and I am not sure if the rain from outside is louder than on the music) and such like. That it is beautiful in its atmospheric approaches and that of course doesn’t change now I now it’s all done without electronics, but with the list of items mentioned earlier on. This made me re-think how music like this is made and perhaps, with all the electronics in the world, it is easier to assume it is all made that way, not through some more or less acoustic manipulation of sound, but surely that too is way to create music. The close to forty minutes this piece lasts is absolutely great. Slow pace, great sound, nowhere static but in constant motion and this is one of the best releases I heard on Attenuation Circuit in quite some time.