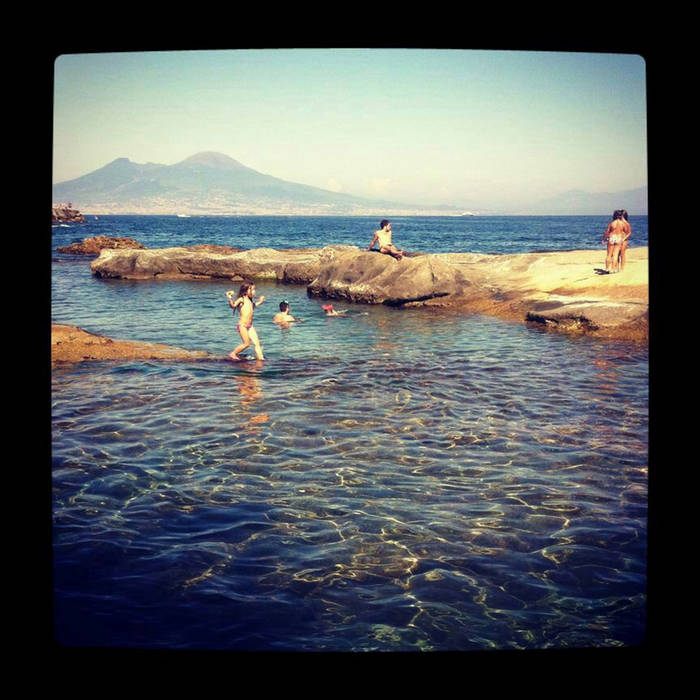 All music composed and arranged by: Alessandro Quintavalle
Mixed by: Luca Canciello

If you enjoy things loud and unforgiving, than this release might be something that you will like. It all starts with ‘Rabbia’ which is like a vicious loud disease, scraping the hairs of your skin with poisoned worms with spiky beaks crawling under your skin causing internal bleedings. It’s like a stable chemical warfare in which an industrialized version of a vacuum cleaner sucks the life out of you while the one who controls it breaths oxygen through a gas-mask.

A rusty pointy fork might even be inserted into your ears, nicely twisted for extra damage & opening the hearing gates to even hear more of this sickness that is most Devine. There are dangerous melodic tones in there, something from the religious part of hell. If the vacuum cleaner stops it’s ordeal demons will float straight out, making you feel happy when the sucking restarts and sucks it all back up.

The music is pretty unforgiving, like an industrial torture experiment that attacks both ears with mechanic machinery that reacts as if it’s a monstrous monster that is very much alive, and pretty much in a nasty mood. No more prettiness, everything that slightly resembles ‘prettiness’ must be annihilated. That is what this music seem to imply, as it’s keeping the ears fully occupied with deaf-making blatant noise.

The glittering sound of a whole collection of broken pieces of glass is being shoved around like a enormous load of cutting edge material. The sound might get a bit friendly with the sound of a steam boat honking its horn of smoke in the back, but it keeps on throwing and crushing its sharpness in your skull as if we are a recycle factory. The litter of glass becomes so thick that the sharpness might even gets moldy, making our ears safe from bleeding and cuts, turning us into fakirs that like to use the trick of a whole bed made out of nails to sleep upon.

From a distance the pain of this sound must be unappealing for a reasonable listener, but once you feel the fakir inside you taking over you’ll be even able to actually sleep and relax through this ordeal of loudness. It gets more nasty, probably burning holes in the left over parts of sanity; but that’s probably why it also sounds good; I suspect it’s lobotomizing listeners as they listen!

If you enjoy what you hear then Foia would be also up your alley of pain and pleasure. It’s as if your head is being driven over by a huge tractor & your hair got stuck and now you are basically just being dragged underneath it while it’s doing its business on a huge piece of farm land. It’s a gruesome experience; you just know you’ll end up bold, deaf and perhaps brainless. It’s crushing and mostly stable, creating a feeling of ‘no escape’ and pure endurance.

A little bit shorter (twenty-nine minutes) but a little bit louder is the release by Altese. The cover says that the music is composed and arranged by Alessandro Quintavalle, but Luca Canciello mixed it, so I am not sure how and why that is. Obviously there is no mention of any instruments, or any of that ilk, so my best guess is some collision of synthesizers, sound effects, stomp boxes or digital, and maybe some kind of sampler or drum machine. You never know these days, do you? I assume Altesa hails from Italy, a country with a lively harsh noise scene (I never figured out why, come to think of it), but I can easily see Mauthausen Orchestra, MB or LXSS being the main inspiration for this unrelentless industrial noise. There is that word again. What's wrong with me today? In all the 'tags' Atenuation Circuit use on their bandcamp page, this is the one they don't use, oddly enough so it seems to me. I like good slab of old school industrial noise; a bit of distortion, a bit of feedback, even a bit of rhythm from time to time, minimal as they are, some fucked radiotransmissions, and ending in a good all white noise out. Not for daily consumption however, this one.
(FdW)