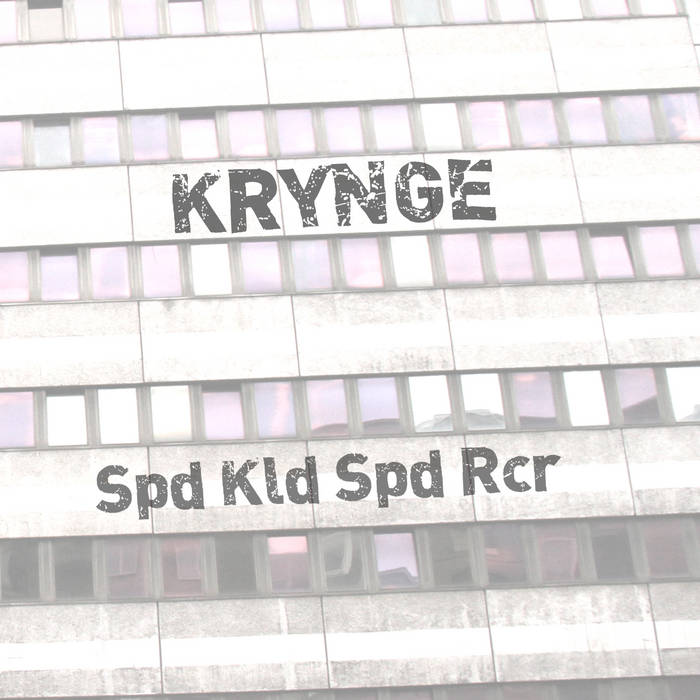 KRYNGE, the multi-collaborative international supergroup, was the brainchild of Zan Hoffman in 1987-88 and features recordings of his home taping friends reimagined. Acknowledging the debt the contemporary experimental music scene owes to the pioneering work of the tape-trading and mail art scenes, Attenuation Circuit celebrates the 25th anniversary of KRYNGE by re-releasing the original cassettes on CD in bi-monthly instalments. The Krynge series comes in a dedicated new design while also containing reproductions of the original cassette cover art.

The title “Spd Kld Spd Rcr” may be an onomatopoetic rendering of the throbbing, whizzing noisefest that Zan Hoffman creates several times during this 30-minute outing by layering the audio sources by his collaborators Agog, Minoy, and Swinebolt 45. On the one hand, this is possibly the closest the KRYNGE series has so far approached what we know today as “noise music,” furthest away from the pop remnants on the debut “Singe Binge” (ACR 1008). But it’s never noise for the sake of negativity, and the way the noise sequences are interleaved with silences and sudden vocal-only breaks shows Zan’s growing mastery of “the 4-track recorder as compositional tool.” Vocals here means not singing, but all sorts of contorted speech, contorted not so much through effects, but in the very act of speaking: the speakers go out of their way to sound weird, which is a lot of fun, but verging on the scary. The uncanny sound poetry that results from these experiments might equally be transcribed as “Spd Kld Spd Rcr” at times. The ‘phrase’ is also a hand-scrawled ornament on the enclosed original cassette artwork, placing itself (and the music hereon) somewhere between message and noise, in a creative no man’s land rife with possibilities which were beautifully put to use on this recording back in 1988.

The American sound artist Zan Hoffman impressed us greatly when we heard just one tape of his called Zanstones Fur Berlin, released by Staaltape and noted here. I now learn that another one of his many guises and projects was Krynge, described as a “mutli-collaborative international supergroup” which he masterminded in the years 1987-88, and the CD Spd Kld Spd Rcr (ATTENUATION CIRCUIT ACR 1012) represents the first time that a Krynge cassette has been reissued in digital form. I would guess that Zan produced it by layering and reprocessing contributions from the other home-taping collaborators – Agog, Minoy, and Swinebolt 45 – who were presumably part of the Krynge cabal, although it’s described here simply as “reimagining”. Much to Zan’s credit, he did it all with a four-track recorder, and I agree whole-heartedly with the sentiment that declares he is using the technology as a compositional tool. He succeeds in creating a delirious whirl of sonic information, absolutely teeming with life and vitality and mad ideas rushing past at speeds of mach number. Amazingly, it seems that much of the original source material is recordings of contorted speech, where the speakers themselves – presumably Agog and company – are doing everything possible to distort their own voices, without the aid of technology. They are simply speaking in a weird way. Without exaggeration, it’s fair to state that Hoffman unleashes the hidden inner power that is inherent in everyday events, re-presenting the world as an incredible powerhouse of seething energy. While this raging force may at first at seem a storm of chaos and randomness, you should try and calm down and listen out for the loops and repeated elements which will serve as anchors or index points. And though it may also seem to present a scary view of an unfamiliar world, it’s not an outright evil sound – Zan is not on a mission to terrify us or destroy normality, rather perhaps to reinvigorate our sense of the breathtaking beauty of humanity, of the creation. In that regard I would liken him to Aki Onda, even though they probably use quite different methods, since they seem to share common ground on the way that magnetic tape can not only capture amazing things, but then make them seem even more amazing through distortion and playback. Dreams made into the concrete…