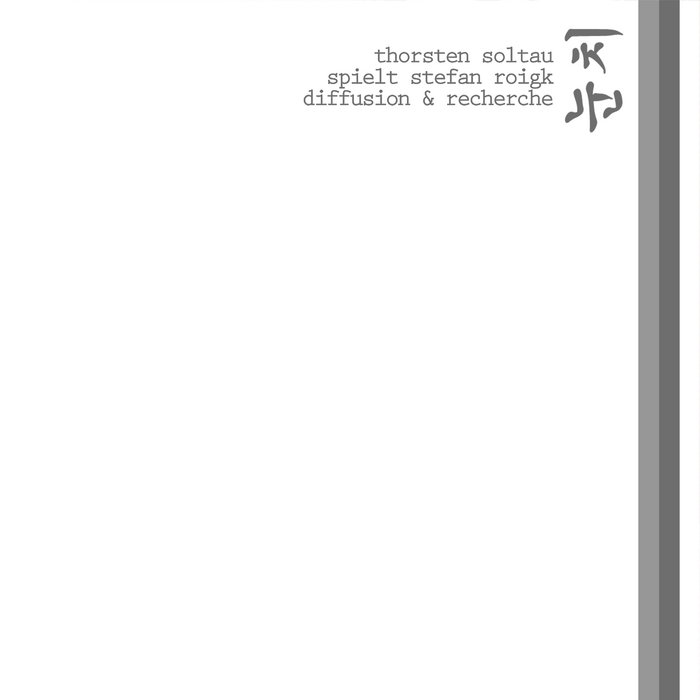 Thorsten Soltau’s way of composing is very close to certain aspects of radiophonic art. He often collages found musics and voices with material played by himself, creating half-abstract, half-narrative pieces which have a strong human presence thanks to the voices, and perhaps especially because the people we hear are allowed to keep their secrets – stories are only ever hinted at, never spelled out. This album is an excellent example of this manner of working.

Here, Soltau draws on two main sources: sounds created by Stefan Roigk and texts by WF, spoken by the author and recorded with a dictaphone, which creates a ‘vintage’ sound that adds greatly to the overall melancholic atmosphere of the music. The overall pace is slow, with organ-like drone chords gradually ebbing in and out. The ethereal sound of a theremin, played by Martin Schramm, accentuates the sound world by adding some higher frequencies.

At times the recycled sounds make me feel like checking the cables; are my ears still working? Is it really to sound like this or might there be an error along the way? We might have lost the hearing on one side of the ears as the artist focused more on the other ear..

It is fine, soft early morning sewer sounds come in full stereo again. Little drops of urine do a little morning gathering in a nice acoustic environment of pipe-works. It might as well be recorded in a closed public toilet. Everything and anything is being able to be reused, recycled and cannibalized for the greater use of sound art. The soft lovely crackles return and make the environment nice and warm. I would love to sit down on a toilet seat and combine this part of music while reading an old fashioned newspaper.

A soft repetition of an experimental guitar-ish robot making sound repeats itself in the soft ambience of warm morning crackles. I can hear some activity in a background kitchen, some early bird moving some cups while a voice whispers something that I can’t understand. It sounds like an tiny insect that uses a next door toilet and reads a similar newspaper out loud. But with its tiny body the volume of the voice is just too soft to hear if she is reading the same stuff as the paper that I’m reading.

It’s a good morning show, a very warm session of some time for yourself. It’s pleasant news that the friendly sound of soft crackling keeps itself going for a while; Long enough to finish the morning paper. Just at the moment that I want to go for the task to wipe my butt with a tissue, a new polite group of recycled voices come in. A organ classic melody raises its tone to make this wiping moment one of compliments. Some soft and yet high uprising tone flies by for a while to replace the organ and after the use of the bidet; it’s time to pull up the pants and release this article. This music is a perfect match to team up with your morning (skipping the coffee!) ritual..

It starts of polite. Then makes sure you are awake. Let you do interactive things like checking the cables. Calms down for you to release a brown morning fudge. Wishes you a polite continuation of the day at the end.

Grab yourself a copy of this tape and your morning would be highly enriched.
<KN>
yeahiknowitsucks.wordpress.com/2014/11/24/thorsten-soltau-spielt-stefan-roigl-diffusion-recherche/