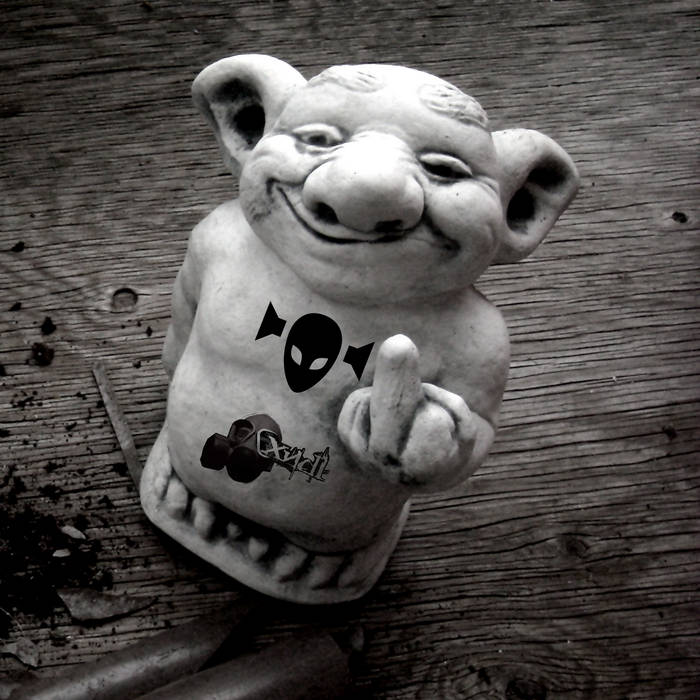 For years, the work of elektrojudas released on Attenuation Circuit has been linking the drone/ambient flavour of the label to more dance-oriented styles of electronic music. On this split LP featuring four tracks by elektrojudas and three by his long-time musical companion XNDL, the two collaborators give an impressive insight into the hidden kinship between abstract instrumental hip hop and drone electronica.

XNDL has been active since 1998 in musical styles from hip hop to drum’n’bass as a DJ, producer, and engineer, working with artists such as Anticon, Botanica Del Jibaro, Shapeshifters, Plague Language, and many others. On his own record label Subversiv*Rec, he published some 45 releases by underground/abstract hip-hop acts. This LP is co-released with his current publishing outlet, cognitive*defect.

This split release marks a new step in the ongoing artistic
collaboration of XNDL with elektrojudas. Both sides of the vinyl are
unified by mid- to downtempo beats with a rather relaxed feel. Dreamy
piano chords sometimes make you think that this could be a nice
chill-out album. But then you turn the record over, and suddenly
jarring, guitar-like distortion and high-pitched oscillators change the
atmosphere. Things do not get faster, but the tension rises … until it
is resolved again. An exciting sonic journey that showcases one of the many paths of musical innovation in the hip-hop tradition, and an
admirably consistent approach shared by the two artists.

YEAH I KNOW IT SUCKS:
The following split between Elektrojudas and XNDL is one for the fans of the electronic melodic style. Retro lovers who browse the web for the classics will be able to add this new one to their collection of early birds with also enough modern day twists to build a bridge to the nowadays.

Elektrojudas starts off with a downtempo introduction that simply promises on its own a good set of electronic music. The artist isn’t lying as it’s continuation with a pretty track named ‘erision’ brings a nice blend of cool and yet laid back electronic synth music. The electronic music is matched with nicely programmed clear beats but it is the slow intriguing melodies that steel the show. The tune ‘nothing else’ especially highlights the great skill of bringing a calculated old school electronica piece that has a dramatic technoid pop structure brought out in a masterful way.

For some reason it made me think of the classic techno track ‘u-boat’ , it has this strong melody from a very German caliber. ‘Monday in my mind’ is again sounding like such a classic, going for a lovely but dramatic piano melody that gets integrated in the electronic structure. For all of the tracks delivered here by Elektrojudas counts a very strong talent in melody making which are memorable with a certain retro feeling. It sounds classic in the techno sense of the word which certainly adds to the melancholic mood of them all.

XNDL is also strong equipped in the melodic electronica way and because of that a great teammate for the music done by Elektrojudas. XNDL does go for a different direction, experimenting more with the structure, beats and sounds more industrial influenced in my opinion. The pop structure is out of the window but the electro rock is now prevailing and ruling this side if the split.

The music is less straightforward but definitely got me grooving on the fat sounding beats, excellent dark electronic vibes with here and there moments of pure prettiness. The tracks are like a well-made moody puzzle that sound intelligent to kidnap the listener from beginning to the entire end of the record. An end in which every kidnapped listener will be finding the dark groove that goes in the heart like a moody but powerful memory.

This is a excellent split featuring two sides of a melodic dark electronic melody coin by two different projects dealing with their own style and delivery. Elektrojudas brings more the classic structure bringing happiness to the electronic nostalgia lover, while XNDL is more alternative and intelligently upbeat while keeping up the dark moodiness of this session of togetherness. In other words check this split out as it is pretty good stuff
<KN>
yeahiknowitsucks.wordpress.com/2014/12/20/elektrojudas-xndl-split/

So, here’s something slightly different from a stuff I have reviewed before. I listened just a couple of rhytmic projects and most of them are not my cup of tea, but I fell in love with this split LP on a first listen. Elektrojudas and XNDL are more into music than noise, but they know how to get things done. What is significant for this LP is the variety of melodies that both projects are using and by that, they are incorporating minimal industrial ambience and slow down tempos for a unique and distinctive compositions which will relax you in no time. Also, there’s a lot of synths from the eighties which suits very well on most of the tracks and it leaves the space to a listener to figure out how both projects possess quality, ideas, skills and more important, knowledge to pleasure everybody’s musical taste.

It’s not easy to name best tracks on this one, because all the tracks have different touch and you can’t just name the best or the worst one when all the tracks are good. That’s a pure beauty of the whole LP and I simply know that most of you who read this review will be satisfied with the material which is presented by the both artists.