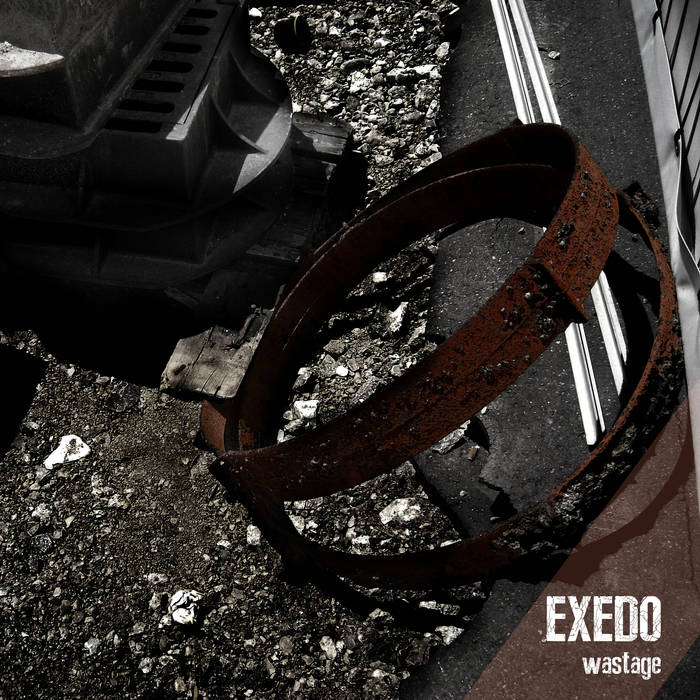 former available as a cassette
limited edition 4 copies / SOLD OUT !

Brilliant headcleaning, dynamic harsh noise, with quasi-punk energy and a massive bass growling beneath a thunderstorm of pulsing distortion. The tape is possibly the best medium fot this kind of sound, because if played loud (which is a must), some additional analogue distortion may result.

Exedo uses samples snatched from other projects on attenuation circuit as source materials for his noise treatment. Bringing out the noisy rather than the musical side of the recordings, the audio “waste” that is virtually present in every recording, Exedo makes a statement about the fact that every medium has a limit, an outside. This is not at all about pessimism and entropy, because Exedo uses this self-created waste to create new works from it, works with a fierce beauty for those whose ears are attuned to noise art. The companion release “Waul” shows that this way of “upcycling” very similar material can in fact yield pretty different results even as noise.

---------------------------------------------------------------------------
AMBIENT NOISE WALL:
Some stories begin incredibly banal. A butterfly triggers a tornado, a few braking cars jam out of nowhere - and the simple question of a musician marks the birth of an underground label. If you ask the Augsburg Sascha Meier barn, why he opened his label only after ten years for other artists, the answer actually sounds outrageous casually. For then he shrugs and says Gerhard Zander, an artist friend, asked him a year ago. "Attenuation Circuit was that beforehand just a name I gave to my work. With the label had little to do... " . As simple as it can go: What was formerly a mere shell, is to Baren heart. Who knows the sound art milieu, the lights a barn Meier's favor on the establishment of a platform. The scene is indeed an international network, but arrested in the niche - Regional often unnoticed and spacious with its myriad small and micro projects, the sound from local studios and Eckstraßengalerien. If that is evident to, which is found mainly a laudable: The platform comes without fanfare from Off The Hook. No educational mission, only experimental sounds. No finger-wagging, just charming shrug.


Who is the by, is not a fan of radio-friendly tunes. This is by no means self-evident. The label features apart from the usual sorts of strange food for the untrained ear: Noise, Breakcore, Industrial, taciturn and gloomy so. These then processed, for example, Gerhard Zander "Buddha Machine", a jacket pocket suitable box, buzz from the meditative sounds. The project "Sustained Development" gets down to the John Cage Organ in Halberstadt, whose nickname "As Slow As Possible" it has earned a continuous piece of music since 2001 with integrity. The Augsburg R.X.o.N. processed per piece only a sound through an entire disc. And barn Meier itself prescribes itself as "Emerge" of musique concrète, that style of music, then, the use of facilities solely everyday sounds, Broken Read-in and Found.

The enumeration Probierpanoptikums this could go on forever. Fact: If you like this music, is usually not a lover radio compatible instant melodies. Zurrt too much and pulls the platform at the border, draw the most between music and noise. Gerald Fiebig, spokesman of the label, you need only one set to take the air every suspicion of riot sound: ". The Beatles were also times Barney" "What today so no one wants to see more," adds barn Meier. If the boundaries are blurred when the Beatles were times crash, then what is actually still music? "Music is organized sound. Point, "Fiebig adds. The two agree more obviously it does not. On the contrary, the principle of verse, chorus, verse was no longer appropriate today. "The 20th century has begun yes, strictly speaking, with the art of noise and nowadays there are also hardly any classical composers that make something like in the heyday of classical music.

Classical music can be found experimentally, "says Meier barn. That love songs, political songs, danceable disco sound, however, look almost old is clear. Too much should be said, too little is new. "There are no big, new findings in the mainstream anymore." One suspects the index finger in such sentences, but Fiebig and barn Meier smile too often to act instructive. "The expectation that music is something that makes an emotional feel-good effect with it is rooted in many people. We see but extremely cool. We just sit, "says Fiebig. There it is again, this ease of playing. Like a shrug. And something comes with a single banal question.
ambient-noise-wall.blogspot.com.es/search/label/SASCHA%20STADLMEIER