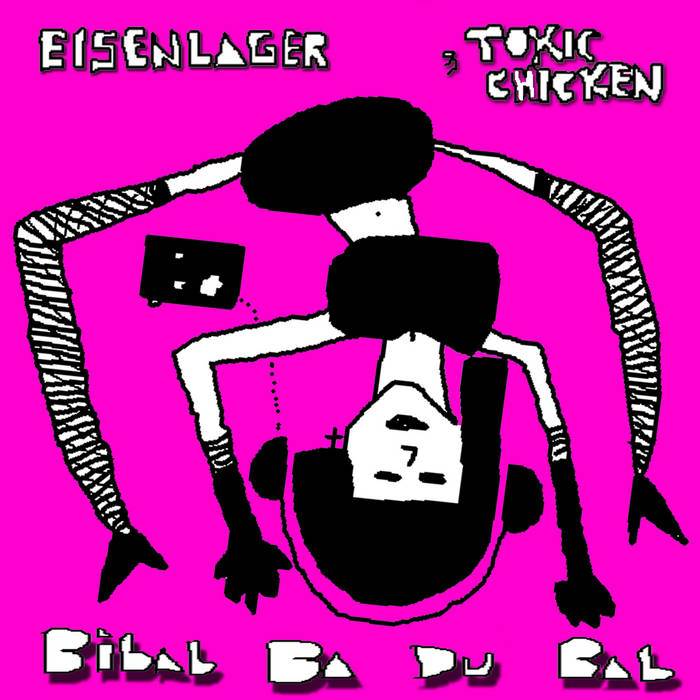 I browsed by pure accidental and innocent intentions to one of my favorite noisier and adventurous underground record labels out there ‘attenuation circuit’ and what I found surprised me in most peculiar ways. Apparently the first brand new album that got brightly beamed upon my own eyes was something that I had been involved with. I seriously haven’t had a clue it would be out and about & certainly not on this prominent label. All that I knew was that it would be popping out one day on the artist’s named Eisenlager’s very own bandcamp page, so this was a double surprise, but one in the good sense of the word: I love attenuation circuit. Is this love mutual? We will never know!

Anyway, now that I accidentally bumped into this release, probably directed by the powers of the universe, I feel like mumbling a bit about it. So if you are into mumbling; you are at the right place over here. Let me mumble about the titles in this release, they must have been thought of by the dear Eisenlager. I like the album title, to me it sounds like the sounds that I make on a regular basis when making a joke about doing a dump in someone’s mouth. The person having a mouth full will be saying something like ‘Bibab Ba Du Bab’… I know it’s the kind of humor that is literally bad taste, but hey; someone needs to fill in these gaps on the market.
The track titled Books is one of the more concrete ones on this release, as indeed the sound of flicking through the pages of a thick pair of books could be heard. In a way that is funny as you could say that it’s a audio book, only nobody is reading it, just shining the spotlight on the touch and smells of those pages that books have naturally. If you never flipped the pages of a old thick book; I highly recommend it. Much more entertaining than staring absently into a ‘smart’ phone.

Yeah I know socks must be a funny jab to the place that you are reading this mumble session on & ‘why add lyrics – I dislike typing’ is clearly a sarcastic joke that wasn’t coming out of my fingers as I clearly do like to type – hours on end. Even when sleeping or when passed away I would probably type mumbling things like a biblical back story of Bibab Ba Du Bab! But let’s mumble some more about the music on this album; it is a bit strange, coming out of a darkness that I can’t really define. It’s music hailing from a time that feels like it has been channeled through shadows and psychotic realms of creepiness that never really become frightening, it isn’t of the major scary kind, but more relaxed and atmospheric in gloomy ways.

The side of me (the one that has been involved with this work) seems to have been onto a switched off mindset, being almost unconscious or with musical memory loss. That feels very interesting as thanks to audio magic by Eisenlager it is almost hard to define who did what & what’s what. It’s like waking up after a coma and finding out you have been actually working on a album! The one and only Eisenlager certainly has worked hard on it, smashing it to create sound-collages that suck a person into this ambient world that slight nightmares might have been made from, yet do come across like friends that aren’t out to scare you in any way.

To hear this combination is something different, you can hear a more grim side as the album flows through its gothic chapters, one that you almost want to experience with the curtains closed and some flickering candles as a companionship. Most credits must go to the one and only Eisenlager, taking the time to put this entire puzzle together and for having the ability to turn it into a easy listenable emo-trip that would soothe a mindset in the need for a German touch and vibe. In any case to find it as a free download on Attenuation Circuit by accident is a nice surprise for a hot sunny summer day, providing enough shade to protect yourself from burning in the sun & allows you to refrain from looking like a fool with a summery hat. With these wise mumbling words I stop this ‘book’ and provide the over excited potential listener (might this be you?) with a link into this darkness:
<KN>