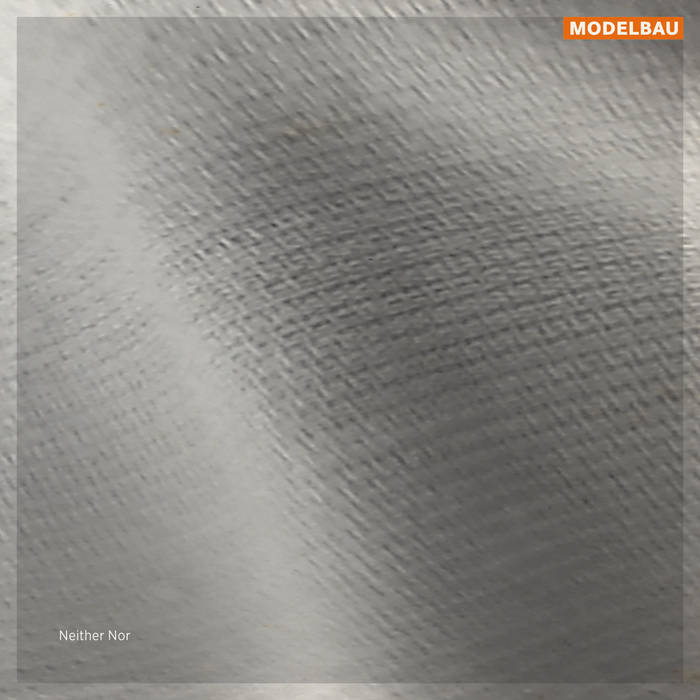 Modelbau is not the latest in a series of names used to create music, but it is indeed the latest one for a solo vehicle. Each of the names, and that includes my own name, stands for something particular, an idea, and something not found in the other monikers I am using. Modelbau is, like Freiband, not a proper German word (it should be Modellbau, but I thought that looked ugly) and as such is probably already a lo-fi name, and as such also very personal. As a musician I have noy a particular instrument, nor do I favour any technqiue, and I think one should use what is needed for a particular project or a piece of music.
When I started Modelbau, I wanted to use various lo-fi sound sources, such as Dictaphones, walkman, shortwave radio, small synthesizers and such like. This would not be a project for improvisation, but more or less planned pieces of music. All of which to be released in the digital domain only. That was in 2012. Now, in 2017, almost nothing is left of this outline, and yet the msuic is very much what I envisaged as Modelbau. These days Modelbau uses pre-recorded cassettes, iPad apps, sound effects, laptop, shortwave radio, small synthesizers, ancient 2bit sampling device; everything is recorded on the spot, as is, and without multi-tracking and very minimal editing (save for fades and mastering) released as downloads, but also on cassette, CDs and CDrs. Vinyl is only a matter of time. Whenever Modelbau plays a concert (all of which are recorded) preparations are made, and these are also recorded; sometimes they have these preparations can have the length of a concert, but they can also be single pieces of a few minutes. All of these recordings are archived and whenever a release is prepared, the latest sessions are listened to again. 'Does it stand the test of time', is it still interesting.
The pieces on 'Neither Nor' were all recorded on a single, particular fruitful afternoon in October 2016, while waiting for guests who arrived too late to be part of any recording. Free form spacious and lo-fi, complex and minimal, steady and yet always with movement.

In imitation of prolific Dutch writer Simon Vestdijk, Frans de Waard should be considered "the man who records faster than God can listen". As Modelbau he has been releasing CDs and cassettes non-stop since the project's establishment in 2014 and this is the second release this year already.
First track "Nearly" seems to take us back to the modulating drone based sound of 2016's "Four Squared Wheel" on Moving Furniture, but the track slowly develops into something more rhythmically charged and ominously dystopian than anything on the aforementioned album. The track ends with a clean square wave that sheds the electric tension that it was vested with, until also this tone dissolves into a distorted cloud of lfo violence.
"Nullify" is based on a surging mechanical loop that slowly devolves in an 'Alvin Lucier' kind of way, assimilating it's own excremental feedback while an attenuation machine in the background squeaks and creaks to keep the volume within acceptable parameters. In the end it manages to do so but it's left with a crackling valve and a bunch of flickering lights.
Considering the ambient nature of the first couple of tracks, "Nostalgia" is a real floor cleaner; it's a synth-based noise piece that immediately slaps you in the face in a 'White House' or 'Arafna' manner, though its frequency distribution is rather mild by comparison as it has a lot of emphasis on the low end, especially a few minutes in. Then things cool down and become ambient again on "Namesake" and yes, perhaps a bit nostalgic even. A melancholic mid range drone stretches itself out to offer a stage to electric humming and croaking of both machines and vocal chords. The track then strands within the looped rehearsal phase of a violin recital. "Niche" cites "Four Squared Wheel" again, but this time the organ tone has a clear impetus that allows it to progress into a bath of trembling noise until it briefly hits the breaks and leisurely u-turns out of the simmering hiss. And finally, the core sound of "Nevertheless" is a punchy synth bass that either through LFO or looped envelope generates the same note repeatedly, until it is accompanied by a second synth that sounds like it was initially spread out and slowly swelling towards the foreground, but then echoes the punctuated beat of the first in canon.
I really like how Modelbau constantly evolves and incorporates its previous ventures into more versatile sonic landscapes. For such a productive outlet you'd expect a certain reiteration of moves that becomes all too familiar, but somehow De Waard doesn't allow that to happen. (PJN)
www.vitalweekly.net/1073.html

Nearly’ is the starting point on this fine Modelbau release, a project by the legendary sound man Frans De Waard who is also the creative brain behind the longest running source for alternative experimental music Vital Weekly. This information might have nothing to do with the track, but gives you a good impression that this is the sound of a sound veteran who not only earned his skills by doing things himself, but also by hearing many different releases; let’s say that he has been around. Not surprisingly ‘nearly’ is living up to the high expectations a listener and fan of Modelbau might have; a very intoxicating hallucinating mix of audio goodness, filled with detail and rhythmic precision it forms a buildup of great suspense. It’s like a distinctive robotic march in a clean alien surrounding, warm, fuzzy and fearlessly electronic.

With ‘Nullify’ Modelbau gives even more warmth, a nice collusion of crackles, interesting backdrop of unknown business and a superb coziness of a machine like sound that softly hums as if it is a relative of a didgeridoo. But don’t sit back too comfortably as Modelbau will pierce your ears right out with ‘Nostalgia’. A loud but high bird-like expression that seems to be on a high voltage, repeating its thrilling sound in rapid speed with a growling cat like purr attached to it. Feelings wise it is exciting like a wake up call and yet comfortable cozy at the same time. Slowly Modelbau seems to trigger more nature into the thoughtful event, making me as a listener hallucinate and dream up magical swamps full of new born critters and other mysterious life forms. Very interesting, especially because it might be all electronic, while it all sounds so nature-like.

With ‘Namesake’ Modelbau takes this theme of creating bizarre natural sounding worlds born out of sonic experimentation to the next level. The result is a scene in which imaginative frogs quack, fuzzy bees flap their microscopic wings next to the microphone and a atmospheric glow of sound fosters it all under its wishful blanket. Also worth the trip is ‘Niche’ , a track that conveys kindness and love with a minimal sound that instantly gets into your heart like a well designed love letter. Slowly the card opens up and miracles of wonder seem to flow out; a tonal melody so nicely stretched out that it becomes a euphoric master piece that gets listeners who happen to be under the influence of LSD to hallucinate of pretty rattlesnakes doing a beautiful mating dance with a pretty purring cat; a scene of rainbows, sunshine and excitement in a loving kind of way!

All the way at the final end there is ‘Nevertheless’ which has a more industrialistic techno feel to it. A repeated electronic bass activity that shimmers to the point throughout the recording, almost functioning like a railway for the more floating sounds to follow and fly over. These sounds are warm but dark, like morning drops on the grass; cool and fresh and not so sure what lays ahead on the day. A smooth soundscape of changes in mood that might implode or go for a more subtle end; it will keep you hooked and full questions, as if the story isn’t finished and will continue in a next Modelbau release. A great listen so please do so:
<KN>
yeahiknowitsucks.wordpress.com/2017/04/19/modelbau-neither-nor/