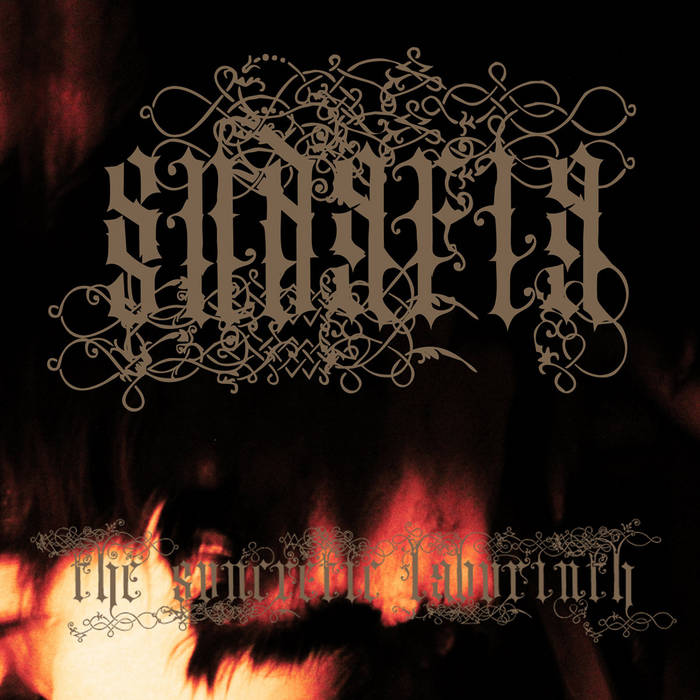 Sudaria opens up the gates of (un)reality to unveil the true shapes behind the mirror of the illusory self; 9 mantras to break the illusion, 9 keys to open the holographic seals of Maya.

«Following in somnambulism the invertebrate steps of a primary Art. Drowned into the ascetic syncretism of silence and noise. The pulse of necro-mechanical cannibalism. Rising beyond Catharsis in ransfiguration; devouring the corpse of the illusory self. 9 Keys to the Gate; 9 mantras to break the holographic seals of Maya. Dressed with the shrouds of Malediction. The Immortal Binary Clock.»

In a binary existence, the idea of quantum suicide can be engaged in order to convince us of our own immortality – we exist only in a world in which we haven’t died. All other universes, however, contain a rotting corpse that looks uncannily similar to ourselves. Unfortunately, not all life and death scenarios are quite so black and white and it is this nagging knowledge that could have led Miguel Souto to protect himself with these nine sonic mantras.

The Syncretic Labyrinth is a dark, contemplative and often hellish joint release from the German Attenuation Circuit and Spanish Sphingidae labels. Ghostly winds and strained, shrieking guitars set the tone on opening track Veils of the Syncretic Maya before a low drone edges in, paving the way for a frightening chugging as if feral pistons were rampaging through rain-drizzled streets. Kapala then pours its gloopy way into the skull of its audience. A thick, blackened bass rumble squeezes into your cranial space as unrelenting, reverb-chained, metallic thuds pound out in the approaching distance. Voices gasp in reverse like a solemn message escaping from the Black Lodge before being replaced by a pained guitar painting the aural landscape. This shifts from solitary notes to driving chords, whipping up a growing sense of tireless toiling – the slog of existence peppered with a glimmering light through wretched gloom.

The labyrinthine cacophony (of which Borges would be proud) that Sudaria has formed sidles easily from tormented industrial clangs, through leaden techno for sleepwalkers, and into a stained dark ambience via the tectonic-plate-bothering plod of some inconceivable colossus. A gentle sea of consciousness is sporadically cleft apart by softly comforting snippets of travelling trams, trains, and trucks, grounding this in the gritty present. A bluster slips by. Lofty ideas can be born in these waters but heads must stay out of clouds. A melancholy piano desperately collapses and Arvo Pärt’s choral chants lie under a canopy of drones. These paranoid yet hypnotic soundscapes give the final moments of this record an ethereal and phantasmagorical quality.

Sudaria is a Spanish project that could be seen as a crossroad between black metal and experimental music if this two categories weren't now a little too wide to be completely descriptive. The black metal influence is present in certain atmosphere and in the constant escape from the monolithic form with some deviation into meditative territories and in the bare palette of sound. The experimental influence is present in the absence of the song form while all track are almost free form or ambient ones.
The first track of this release, "Veils of the Syncretic Maya", sounds quietly with distant noises until a pulsating noise emerges and drawn distant notes of piano. "Broken Holograms" is a quiet soundscape which serves as an introduction to "Kapala", an almost industrial track based on a metallic rhythm with random insertion of distorted vocals. The guitar of "Malediction" reminds to certain path of metal where the sustained notes of the guitar are used to create a certain king of menacing atmosphere interrupted by "Ecstatic Somnambulism" where the electronic manipulation evolve in an almost complete silence acting as a bridge to "Beyond Fields of Transgenic Wires" based on quiet an almost dreamy drones while "Cremation" is closer to the Dark Ambient form. "The Pulse of Endlessness Sinking inside the Immortal Binary Clock" used the regular rhythm evoked by the title in a noisy form while "Ghastly Eaves" sounds as a rock track distantly recorded so it sounds as an electronic or abstract track.
Using some trick to loosen the thick noisy cage of some track and oscillating between noisy moments and quiet one, this release could be a nice pick for fans of industrial or experimental music. It's worth a listen.

Following my introduction with Sudaria from Spain (see Vital Weekly 1079) I find here their latest release, which Attenuation Circuit co-releases with Sphingidae. The way the group made their logo reveals an interest in all things metal music, which is not exactly my kind of territory. I enjoyed their previous release, even if I thought it was all a bit long. Here we have nine pieces, one being over nine minutes but also one as short as just under two minutes. These nine pieces are quite a diverse bunch of pieces really. The aggressiveness shines through a couple of pieces, but as with the previous release, Sudaria does more than just play some metal version of industrial music (or perhaps that's vice versa), but that's one part of it; if you would just hear 'Beyond Fields of Transgenic Wires' and nothing else by them, you could think this is just one of those fine drone musicians at work, with a gentle drone with heaviness underneath it all. It is followed by 'Cremation', which is also a drone affair but a bit more powerful. But pieces like 'Veils of the Syncretic Maya' with them heavy guitars (and isolated piano chord) or the disjointed percussive stabs of 'The Pulse of Endlessness Sinking inside the Immortal Binary Clock' (same piano chords apparently) or the bass hum of 'Kapala' show the dirty side of Sudaria quite clearly. I quite enjoyed the vast differences between all of these pieces as it all made up a fine trip for the listener.
(FdW)