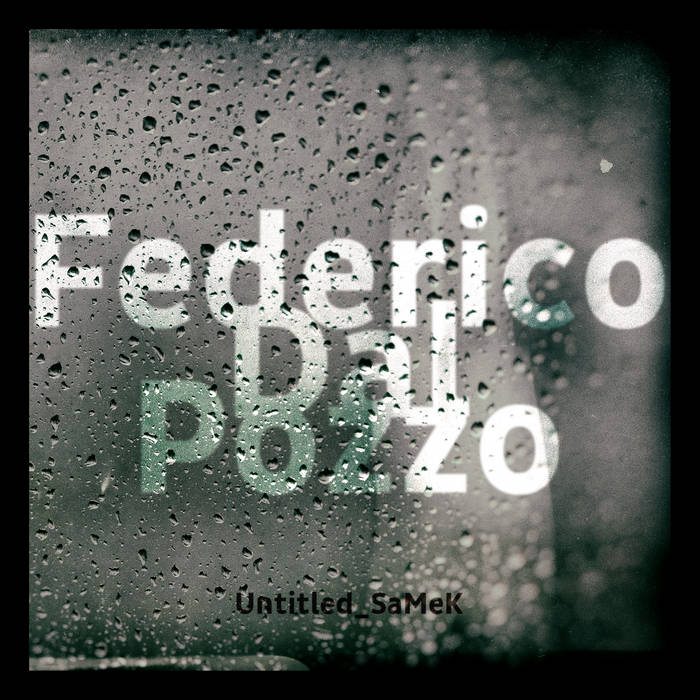 FEDERICO DAL POZZO (Venice,1976) lives in Turin, Italy.
Concrete Composer and Musician, studied drumming with Mario Bracco and Vittorio Panza. In 1999 he joined the DADADANG (percussion parade in motion) with he has playing around the biggest festivals in Europe and beyond (Moscow, Paris, London, Graz,...).

In 2007 he graduated in ''Audio Recording and Music Production'' in Recording Workshop (Chillicothe,Ohio_U.S.A.) and He studied
''WaveField Synthesis'' with Hubert Westkemper (Milan-Italy). In 2014 He studied in Corfu (GR) at “Summer Academy of Electroacoustic Music and Live Electronics” with Annette Vande
Gorne and Theodoros Lotis, and “Improvised Music in small and large Ensemble” with Carlos Zingaro (2014, Atouguia da Baleia-P). In 2016 He studied “Intuitive Music” with Markus Stockhausen (Venice-I). His works, appointed “Untitled_”, are based upon concrete objects and the transfiguration and perception of the
sound and audio- spatialization. He's a Sound Designer in various theatre and dance companies in Italy, France, Belgium, Israel,…. He plays around Europe (Berlin, Wien, Nantes, Oslo,…) and he works in various Italian Foundations for Audio-Installations and Live Performance (Fondazione Sandretto Re Rebaudengo, Castello di Rivoli, Promotrice dell Belle Arti, The Others,…).

While this starts off rather quietly, this slow shaking begins to be heard in the way one might walk with coins in their pocket that jingle. This maintains a sense of quiet about it where I have to turn it up louder than other pieces of music I listen to also through earbuds and, yes, it is worth noting that this best experienced through earbuds/headphones in a personal feel not played out of speakers in a broader sense. Some short blips of feedback come through the jingling.

This rhythm is taken on by the jingles and there are creaks and other similar sounds in the background which are intriguing. A scraping sound or perhaps glass bottle spinning on concrete makes way for these ominous tones that make me feel like this is some sort of haunted house vibe. The sounds all come together as we approach the ten minute mark and while they never get too sharp they do have this way about them before bringing out what sound like church bells.

It seems now as if the music is taking to a place I am unsure of; we are lost in space, lost in some void somewhere unknown. A deep bass can be faintly felt (not heard) ringing in the background. A lot of the familiar sounds remain in place while this synth seems to be building us up towards something, the bottle still spinning on the concrete and that bass still in the distant background.

A tapping sound now as if a cowbell is being hit. Another tone is in here as well which could be a bell and then the two go back and forth as we near the 17:30 mark. It is hypnotic in a way, yet I still feel as if we are being pulled into space. The tones become a lot louder as there are more of them, it has this chorus of bells feel to it and yet it is still not loud enough for me to turn it down. The tones and bells all form together now which has this percussion sound to it though I'm not sure how much percussion is actually being used.

After the twenty-five minute mark some harsher sounds come through, though I'm still not lowering the volume, and it has that way about it where it feels like you're using one of those detectors to find radioactive material or ghosts. It almost sounds like a marble rolling around inside a glass bottle and then that shaking comes back as well. It all kind of ends where it began and somehow I feel more lost and desolate in space than ever before.