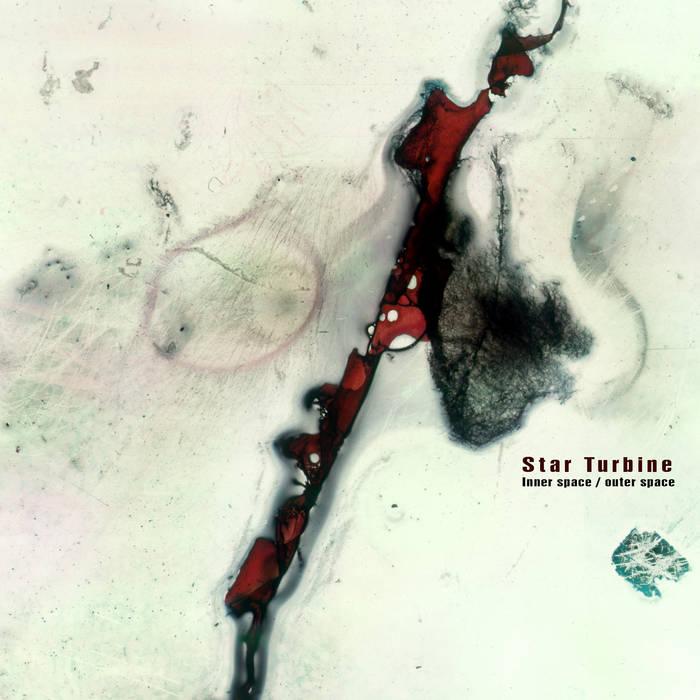 Pulsing machine samples, spaced-out waves of electronic sounds, far-away music from a half-muted radio, metal being beaten by a guitar or the other way round. The music of Star Turbine, the duo of Sindre Bjerga from Norway and Claus Poulsen from Denmark, is built on such seeming opposites that they both work to collapse in their live performances with electronics and prepared amplified objects.

The two takes on this live album were recorded on two subsequent dates of Star Turbine’s “Inner Space / Outer Space” tour in Hamburg and Aalborg (Denmark) in April 2012. They navigate the wide open space between mechanical objects and electrical mains hum, creating imaginary galaxies from mundane materials. “Like all the output of Tangerine Dream squished up into a 1 second sample then dragged out again on a low res JPEG,” is how Star Turbine describe their sound, but the music here sounds much more hand-made and visceral than this suggests, and you can feel that, although everything here has to do with electroacoustics, there are no presets used and everything is played by hand, intuitive and improvised. The amplified object may not be the new folk guitar (yet), but this music sure proves that the prejudice against electroacoustic music being “all computers with no room for human action” is utter nonsense.

Just the other day we gave brief mention to Star Turbine, the Danish-Norwegian duo who improvise in outer space and send their work back to us by radio. They were performing on one half of a split cassette tape, but now I get a chance to hear them solo on Inner Space / Outer Space (ATTENUATION CIRCUIT ACC 1011), with two long cuts taken from their April 2012 tour of Hamburg and Denmark. Sindre Bjerga and Claus Poulsen perform with a combination of live electronics and amplified objects and have a very “hands on” approach to what they do, and the work they generate is always full of warmth, juice, fire, and multiple events…if they’re at all interested in hacking or programming, it doesn’t show up one bit; they seem to treat electricity and circuits as naturally as you or I might regard a bowl of fruit on the table, before getting stuck in to crunching a ripe apple with our snappers. I suppose part of their charm comes from their slightly “distanced” sound, which might be derived from the recording method, or the instruments they play; the label describes this accurately as “far-away music from a half-muted radio”. I also like the way they’re not concerned with making music as such, or even with starting or finishing a piece; they just start to play and then go on playing, with no discernible plan. A certain child-like joy of discovery seems to follow their every move. Lastly what I also like is the very free-form and open-ended nature of each performance; it genuinely does feel like anything could happen, and that whatever landscapes they are creating, it’s usually a nice place for us to be. As you may know I often give short shrift to music which seems to be aimlessly going nowhere, but this does not apply to Star Turbine. Quite often the use of amplified objects simply becomes an excuse for a protracted investigation of a process, which the artist does in the name of “exploring all the options” or something, but with this duo I have no sense of pointless process art at all; it’s just about making something beautiful.