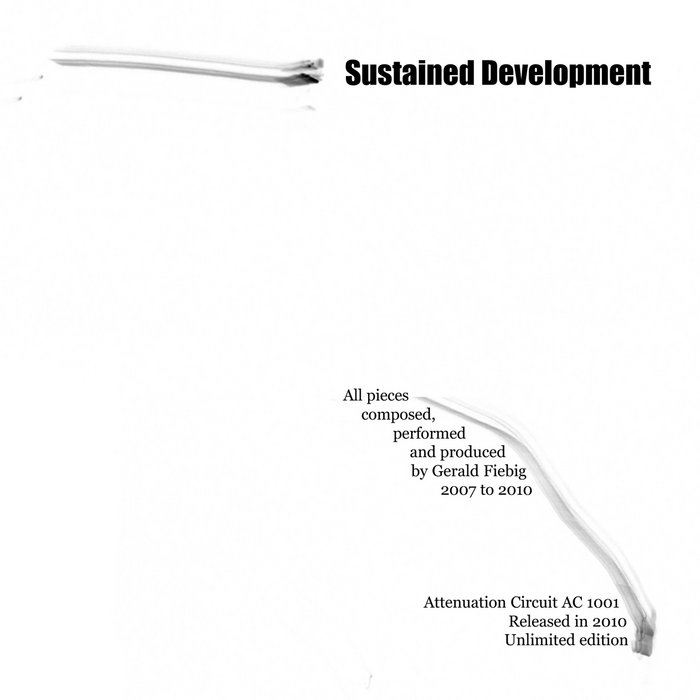 All pieces composed, performed and produced by Gerald Fiebig 2007 to 2010

The five tracks are dominated by layers of long tones and extensive sheets of sound which at first appear as static as sound sculptures before one becomes aware of the microtonal goings-on beneath the surface. Hence the project name which not only refers to the “sustained” character of the tones, but also to the implied process of listening. Inspired by the so-called John Cage Organ in the German town of Halberstadt, on which the world’s longest (and slowest) piece of music started being performed in 2001 (samples of the performance can be heard on the album), as well as by the compositional methods of Phill Niblock (see the liner notes of the limited edition for more information on the conceptual background), “Sustained Development” is an attempt to approach the concept of the drone thorugh a variety of means including layering of instrumental sounds, digital stretching of recordings, and collage. Free jazz musician and audio artist Hartmut Geerken describes it as “a special kind of experience” to “dive into the thrilling and exciting drones in which more goes than one might think at first. While listening, I had a brief visit from La Monte and my old friends, the Dagar Brothers; at full volume, I was worried my almost 40-year-old speakers might break, and the whole thing was concluded by cut-ups I quite liked.”

This is the last item to be heard in the January package from the German label Attenuation Circuit. Sustained Development is Gerald Fiebig, and Sustained Development (AC 1001) is a collection of his drone experiments. He executed them by combining recordings of musical instruments, mostly droning organs and harmoniums, with field recordings; and there is digital editing going on to extend and “time-stretch” certain elements in his overall scheme. Fiebig admits his personal debt to John Cage and to Phill Niblock, the latter being the NY master of carefully prepared overdubs to produce a multi-layered and extremely intense playback experience that depends heavily on good speakers. Sustained Development may not have the magisterial single-mindedness of Niblock, nor does he opt for the extreme duration oft-times associated with La Monte Young and others. In fact most of his pieces are no longer than eight minutes. But he does possess an intriguing way of varying his drones by following a simple curve path that exponentially increases the density, rate and pitch of the sound, so that by the time us listeners reach minute #7, we’re usually gasping for air. ‘Kammerflimmern’ and ‘Nothing Into Air’ both seem to follow this path, and are characterised by an almost claustrophobic artificialness in their construction; the heavy drones just seem to dominate everything in the field of play, until they crowd out all the available space. ‘A Scanner Darkly’ is not as relentless as that, and like the first track it makes more use of external field recordings. Somehow this tactic helps to open up the imaginary space; it’s something to do with the relief of hearing heavy iron machinery alongside inhuman droning keyboard devices. Even so, these cuts are no less relentless in their pre-planned strategy. This record may seem unassuming if you glance at it, but I sense its experiments are thoughtful and repeatable, and that it’s a little gem of compacted minimal droneism. It’s also endorsed, more or less, by Hartmut Geerken, no less a man.

By far the best release among a handful that arrived here recently on Sascha Stadlmeier's Attenuation Circuit label, Sustained Development brings together five pieces documenting the work of Augsburg-based Gerald Fiebig over the past four years. "6'39'' über Halberstadt" collages street sounds and the bells of St. Buchard's Church in Halberstadt with sustained organ tones from within the building, where "the longest-running and slowest piece of music ever composed", Cage's Organ2/ASLSP, has reached its third note in a "performance" scheduled to last 639 years (!). "Kammerflimmern", which the composer helpfully informs us means "ventricular fibrillation, a potentially lethal cardiac dysfunction in which the heart twitches very rapidly without being able to pump properly", is a dark, dirty drone sourced in the sounds of a "dysfunctional" harmonium, which "could be described, paradoxically, as rapid movement in complete stasis towards a catastrophic climax." Yikes.. but if that sounds scary, wait till you hear "Melting into Air". Again (lazy swine that I am) I can do no better than cite Fiebig's accompanying notes: "This is a piece of programme music about today’s global markets and their acceleration towards chaos. The piece is based on two sounds: that of an organ, representing tradition and stability, and that of a 'no-input' feedback device, representing the volatile and highly virtual character of today’s financial markets. Both sounds were digitally processed. The numeric parameters used in processing mirror the development of two important stock market indices (DAX and DJ Euro Stoxx 50) between 15 September 2008 (crash of Lehman Brothers) and 21st February 2009." Fine, but that does little to convey the mounting unease of the continually rising bass over which nasty high register clusters swoop like eagles. This must have been what life sounded like to Prometheus as that bird ate his liver out day after day. After this, the intimate vowels of "Remembrance", based on varying articulations of the letters M, A and O (another homage to Cage) come as (sort of) light relief before the closing "A Scanner Darkly", title culled from Philip K. Dick, sounds culled from weight machines in a gym, various household appliances and, towards the end, an MRI scanner. And you'll probably feel like getting an MRI scan yourself after this splendidly disturbing album.–DW